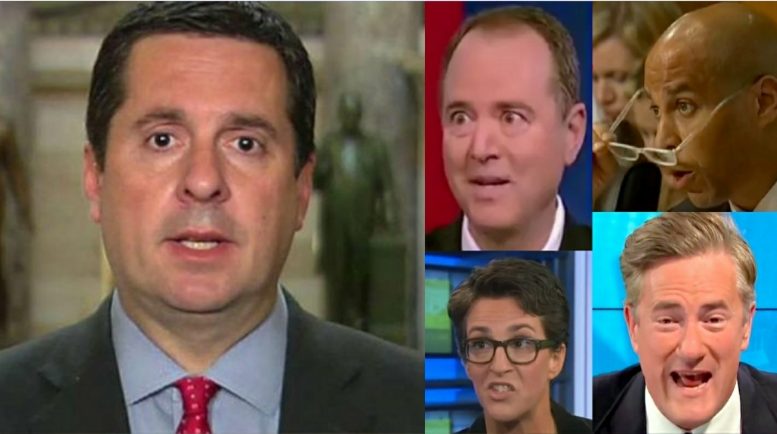 House Intel Committee Chairman Devin Nunes has been in the fight of his life to uncover the truth, as time ticks away to the midterms.

If Democrats take back control of the House, it will ultimately end all inquiries into potential FISA abuse. This is exactly what the FBI & DOJ are betting on. Or as Nunes says, “they’re trying to run out the clock.”

With the help of other Republicans, Nunes has been pushing the President to declassify key FISA documents regarding the spying on President former campaign advisor Carter Page.

On Thursday, Nunes spoke at an event hosted by the Center for Security Policy. And during his speech that President Trump is, in fact, is close to releasing the 21 pages of secret FISA documents.

He stated how he believes Democrats and the media will be “frightened” if those particular documents get released because of the information that is in them. Nunes’ committee antogonist Adam Schiff, and his henchmen in his party and the media, may be on the verge of having their Russian Collusion narrative wiped away for good.

According to the Washington Free Beacon, Nunes stated that Democrats and media admitted “really bad stuff about the Trump campaign was buried in the redactions.” (Continued Below)

Nunes used the notion that democrats and the media know there is “really bad stuff” in the FISA documents to portray why they are about to be faced with their worat fear. Nunes continued by saying:

“And I said, you know what, you might be right. We should declassify the whole thing.”

“And you know why? Because I think they’re going to be frightened by what you see.” Continued Below

The Daily Caller made a connection between Nunes’ remarks this past Thursday to those he made just weeks ago while interviewing with Maria Bartiromo.

Devin told Maria in that interview:

“We are quite confident that once the American people see these 20 pages, at least for those that will get real reporting on this issue, they will be shocked by what’s in that FISA application.”

As a refresher, here is Nunes interview with Maria:

It’s only a matter of time, but odds are that President Trump is about to make all of Democrats and MSM’s nightmares come true upon the release of the 21 FISA documents. Are you ready for the truth? Comment your thoughts below.