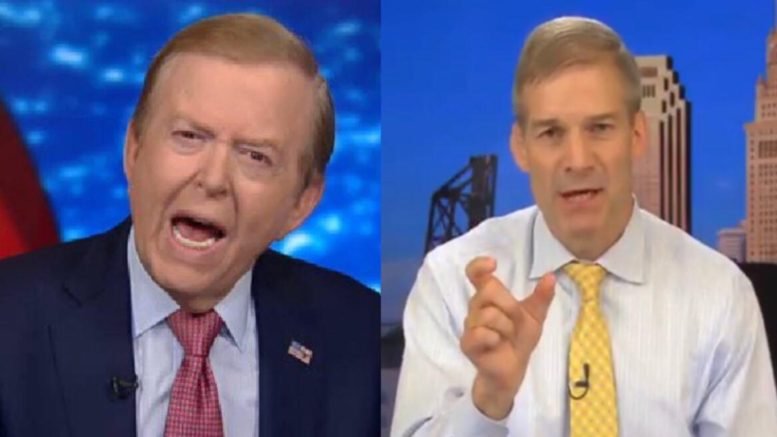 Tuesday evening, Rep. Jim Jordan, (R-OH), joined Lou Dobbs after the explosive news that President Trump will be declassifying a wide range of documents that Republicans have been pleading to have released.

Documents that were declassified include the FISA application related to Carter Page, FBI interviews with Bruce Ohr, and the declassification of texts related to the Russia probe James Comey, Andrew McCabe, Peter Strzok, Lisa Page and Bruce Ohr. (Videos Below)

After hearing the news, Republicans vented their excitement and commended the President for following through.

Especially since the FBI and DOJ have been stone-walling the release of the documents for months. Many suspect the two agencies are banking on Democrats taking back control of the House so the investigation into their shady tactics dissolves.

(Related Article: Congressmen’s Reaction To Trump Releasing The Secret Docs Is The Icing On The Cake) (Videos Below)

During the interview, Rep. Jordan said that the declassification will happen later this week. It’s time the American people know the truth.

Jordan explained that the FISA court was lied to about the unproven, salacious dossier in that who paid for it, who wrote it, (Christopher Steel), along with not telling the court that Bruce and Nellie Ohr were involved in putting the dossier together.

“The crushing power of the state was used to take Democratic’s opposition research and get a warrant to spy on Donald Trump’s campaign. You’re never allowed to do that in America! That is a fundamental violation of how this country is supposed to operate.” Jordan declared. (Videos Below)

Rep. Jordan Just Revealed ‘Key Details’ That Will Be Released Within The Secret Documents

This includes: James Comey, Andrew McCabe, Peter Strzok, Lisa Page, and Bruce Ohr. All the text messages and all of the conversations they had.

Jordan explains that it’s critical, because they’ve all either been fired, demoted, or left the FBI. (With the exception of Bruce Ohr- who has been demoted twice at the DOJ.)

WATCH BELOW as Jim Jordan reveals the key details:

#DrainTheSwamp – @Jim_Jordan: The crushing power of the state was used to take Dimms’ opposition research and get a warrant to spy on @realDonaldTrump’s campaign. That is a fundamental violation of how this country is supposed to operate. #MAGA #TrumpTrain #Dobbs pic.twitter.com/oTK57uO2WI

BOOM! Are you ready for the documents to be released?

Let us know what you think in the comments below.