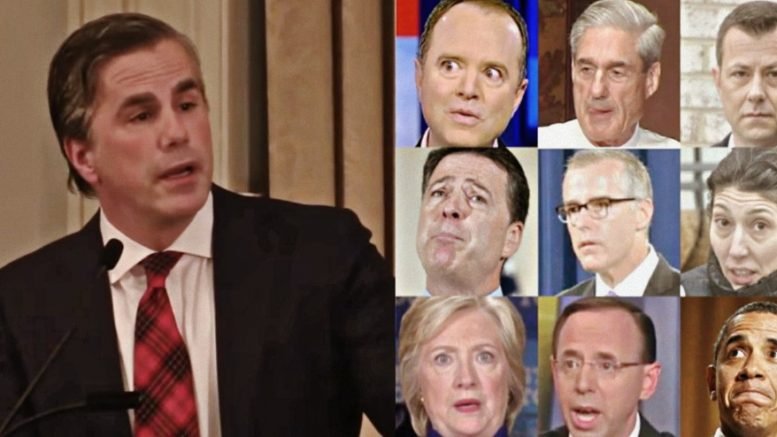 “Now, I know a lot of you here are desperate to see Hillary Clinton go to jail. I don’t know if that’s going to happen. It’s unlikely it will happen,” Fitton said at the beginning of his speech.

“But, it’s important we’ve won in many ways for getting her held accountable to the extent possible given our political system, and the difficulties we have with pursuing Justice against people in powerful places,” Fitton said.

The American people “are sitting on the Grand Jury on election day two thousand sixteen. They indicted Hillary Clinton. And she’s not President of the United States, because of the misconduct that Judicial Watch caught her in with her email scandal.”

The audience clapped loudly and robustly, and there were even a few “whoop whoops” that could be heard over the cheers. (VIDEO BELOW.)

THANK YOU Judicial Watch for discovering the Mueller probe scandal wrapped into the HRC email scandal.

It was the Benghazi “lawsuits that lead to the exposure of the Clinton Email Scandal,” Fitton said, “and little did I know that the Clinton email scandal would so frighten the establishment that they would immediately start to figure out ways to get out of it.”

“And, the way they tried to get out of it was by sicking the FBI and the Justice Department on Donald Trump,” he said.

“This Justice Department and the FBI, while they were suppose to prosecuting and investigating Hillary Clinton, was actually working with her campaign to come up with fraudulent reasons to spy on and investigate and target Donald Trump and his team,” Fitton concluded.  (VIDEO BELOW.)

WATCH the video below. Start at 6 minute mark for Fitton’s acceptance speech.