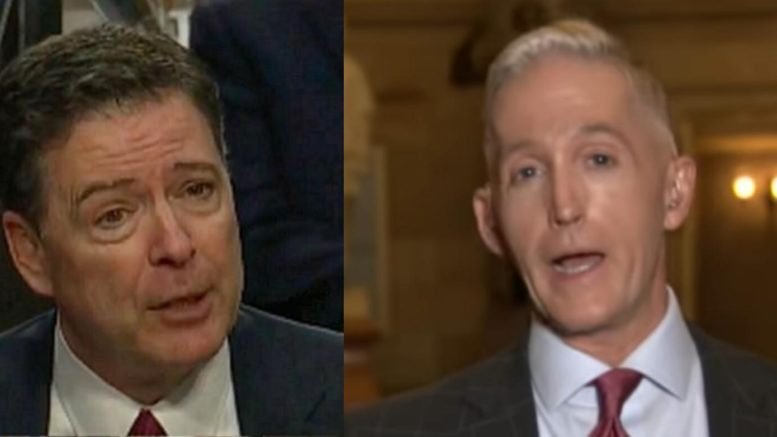 The embattled former Obama-era FBI Director, will be in front of Congress today on Capitol Hill in a closed-door subpoena ordered appearance. (VIDEO BELOW.)

Laundry List of what Comey will be grilled on today on Capitol Hill:

Trey Gowdy is on the Judiciary Committee as well as the Chairman of the House Committee on Oversight and Government Reform.

Gowdy told Shannon the long list of topics that Congress wants answers for from James Comey.

They include: the Hillary Clinton email scandal and how the Trump campaign Russian collusion special counsel was started.

Trey said he would focus on “everything, particularly, the Department of Justice. “Additionally, Gowdy said FISA abuse would be covered, as well as Comey’s paper trail with the memos. “And, all the interviews he’s done since he’s separated from service.”  (VIDEO BELOW.)

Comey is in for a long day behind closed-door testimony in the hallowed halls of Congress.

Gowdy explained to the American people exactly what Comey was doing during Obama’s tenure. He said, “The FBI had a criminal investigation into a presidential candidate.” (Hillary Clinton and her server and email scandal.)

“Less than a month after that ended, they launched a counter-intelligence investigation into the campaign of the other presidential candidate,” Gowdy surmised. “So, that’s a lot of power we’ve given an entity, and it is not too much to ask for the former head of that entity to come explain to Congress,” he said.

And the American people would like to know, too. (VIDEO BELOW.)

Transcripts of the Comey testimony will be available 24 hours after it is completed as agreed by both parties for the American people to view.