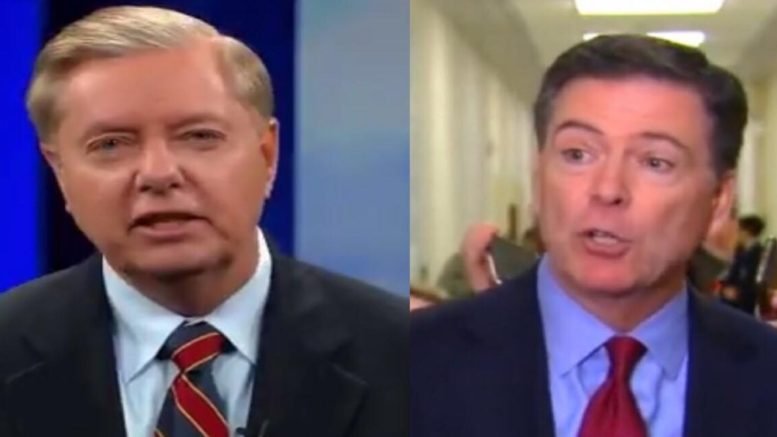 Sen. Lindsey Graham (SC-R) took to twitter Saturday to let everyone know that if he takes over as chairman of the Senate Judiciary Committee, he will get to the bottom of whether the FBI misled the federal surveillance court to obtain spy warrants against former Trump campaign adviser Carter Page.

The South Carolina Senator has become a favorite among Republicans as he has stepped up his game and jumped on the Trump Train during the confirmation of Justice Brett Kavanaugh.

Comey said after his interview to the press, “I have total confidence that the FISA process was followed and that the entire case was handled in a thoughtful, responsible way by DOJ and the FBI. I think the notion that FISA was abused here is nonsense.”

Sen. Graham wasn’t having it, and blasted the Former FBI director on Twitter. (Continued Below)

Sen. Graham wrote on twitter, “In my view the process used to obtain a FISA warrant – and its multiple renewals – against Carter Page should disturb every American,” Graham tweeted.

He continued, “I intend to get to the bottom of what happened if I am Chairman of the Senate Judiciary Committee.”

Further he added, “I look forward to having an in-depth discussion with former FBI Director Comey about his assertion that challenges against the FISA warrant process – based on the Steele dossier – are ‘nonsense.” (Continued Below)

In my view the process used to obtain a FISA warrant – and its multiple renewals – against Carter Page should disturb every American.

I intend to get to the bottom of what happened if I am Chairman of the Senate Judiciary Committee.

Republicans have accused the FBI and Justice Department of misleading FISA Court judges by relying heavily on the Steele dossier in applications for four warrants to spy on Page. They assert that the dossier was unverified when the FBI cited it extensively in its warrant applications and that the bureau failed to fully disclose that the dossier was the product of an opposition research project funded by the DNC and Clinton campaign.

The dossier, authored by former British spy Christopher Steele, accuses the Trump campaign of conspiring with the Kremlin to influence the 2016 election. Page is featured prominently in the 35-page document but vehemently denies its allegations.

House Republicans, led by House Intelligence Committee Chairman Devin Nunes and several members of the Judiciary and Oversight Committees, have led the push to investigate the FBI and Justice Department over their handling of the dossier and the FISA applications.

GOP senators have mostly laid low, with the exception of Graham and Grassley. The pair submitted a criminal referral to the Justice Department on Jan. 5 calling for an investigation into whether Steele lied to the FBI about his contacts with the media.

Steele, a former MI6 officer, met with numerous reporters in September and October 2016 to discuss his investigation into Trump. Fusion GPS, the opposition research firm that hired Steele, helped arrange the briefings.

(Related Article: Nunes Uncovers A ‘Fourth Bucket’ Of Classified Info & Discusses What He Thinks Is In It)