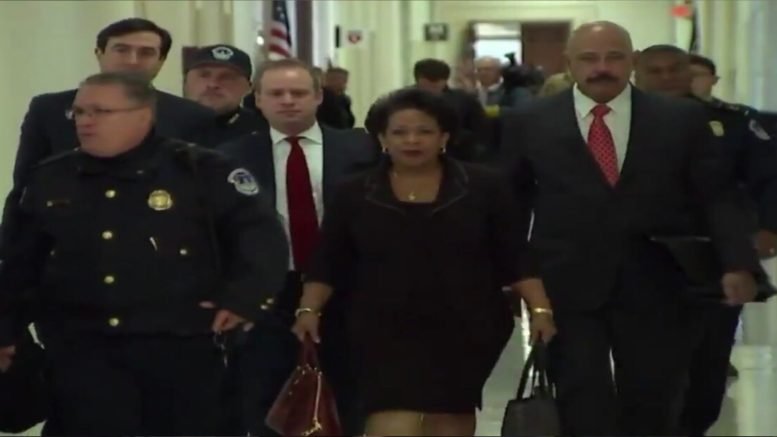 Former Obama Attorney General, Loretta Lynch, arrived on Capitol Hill hours ago for her joint closed-door testimony with the House Judiciary and the Oversight and Government Reform Committees.

Peter Doocy with Fox News took great care to watch out for what Lynch might be asked and compared that to Comey’s testimony from yesterday. (VIDEO BELOW.)

Doocy pointed out that Lynch should know if there was preferential treatment for Clinton under her watch.

Peter Doocy said Lynch, “was James Comey’s boss while decisions were being made on how to handle potential investigations into the Clinton campaign or into the Trump campaign.”

He then informed America that GOP lawmakers, “hope that if there was some type of preferential treatment at the DOJ – she would be the one to know about it.”

Then Peter dropped a small bombshell and said that, “we got a hint about where today’s focus will be.”

“In yesterday’s Comey transcripts, where lawmakers zeroed in on the infamous Tarmac Meeting – where Lynch and Bill Clinton met privately at an Arizona airport – while DOJ then weighed charges against his wife,” Doocy reminded America. (VIDEO BELOW.)

Doocy smoked out which lawmaker detailed the Tarmac Meeting.

Doocy dropped the Tarmac bombshell, he said, “Congressman Jim Ratcliffe asked Comey about the infamous Tarmac Meeting. Comey told lawmakers that he does not recall a meeting “in response” to the Tarmac Meeting. But that he “wondered to himself” about it.

Comey told lawmakers that he was concerned about the appearance of that meeting, and wondered to himself if Lynch should recuse herself from any Clinton matters but he doesn’t remember actually telling her that. He just remembers her telling him that he could ‘run point’.”

Perhaps, America will finally know what was discussed between Bill Clinton and Loretta Lynch on the tarmac on June 28, 2016.  Perhaps it was more than “they greeted each other…and she told [Clinton]: ‘Look, it’s 100 degrees out there. Come up and we’ll talk about our grandkids,'” as reported by AZCentral. Looks like Comey and Clinton are setting Lynch up as the ‘fall-guy’. Will she take it or fight back? (VIDEO BELOW.)

WATCH as Doocy laid down what’s coming for Lynch in closed-door congressional testimony.