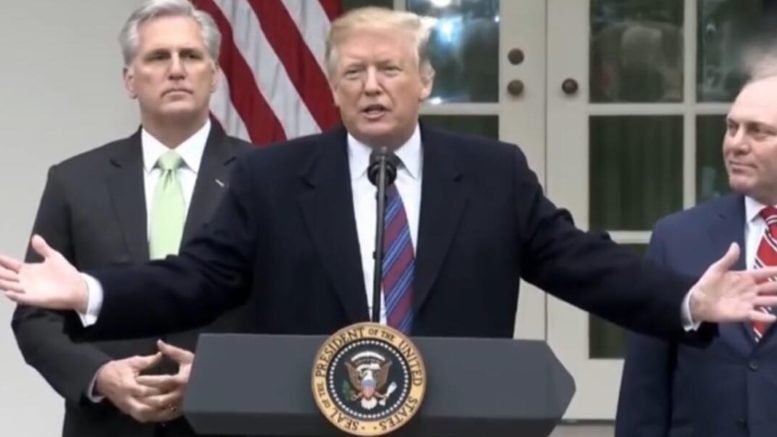 President Trump held a news conference in the Rose Garden after meeting with congressional leaders at the White House on Friday.

Amid the government shutdown, the President doubled down on his stance for border security and the wall, even suggesting he would consider using his presidential powers in calling for a national emergency to secure the border. (Video Below)

The Commander in Chief said during the news conference that he is considering declaring a national emergency to circumvent congressional approval to allocate funds for border wall.

President Trump took to Twitter Friday morning pushing back at the haters seeking to impeach him and also responded during the news conference.

Kevin Corke, White House Correspondent for Fox News asked President Trump, “If you wouldn’t mind, if you could commit on the remarks made by freshman congressperson about impeachment involving a bit of profanity last night.” (Video Below)

The Commander in Chief responded, “Well, you can’t impeach somebody that’s doing a great job, that’s the way I view it.” He added, “I’ve probably done more in the first two years than any President, any administration in the history of our country.”

Trump pointed out a list of accomplishments that included tax cuts, regulations, helping vets, rebuilding of the military. “I can give you a list, I think it’s pages long, so I think it’s very hard to impeach somebody that’s done a great job.”

He noted that Speaker Nancy Pelosi admitted during the meeting, “we’re not looking to impeach you.”

The President added there was no Russia collusion and that he didn’t need Russians to help him win Iowa, Wisconsin, Michigan, and Pennsylvania. “I won them because I went there and I campaigned hard. My opponent didn’t go there enough, and she lost. That’s why I won, not because of Russia.”

(Related Article: Trump Pushes Back At Haters Seeking To Impeach Him: ‘They Know They Can’t Win In 2020, Too Much Success!’)

As a reminder, President Trump wrote on Twitter on New Years Day in all caps, “HAPPY NEW YEAR TO EVERYONE, INCLUDING THE HATERS AND THE FAKE NEWS MEDIA! 2019 WILL BE A FANTASTIC YEAR FOR THOSE NOT SUFFERING FROM TRUMP DERANGEMENT SYNDROME. JUST CALM DOWN AND ENJOY THE RIDE, GREAT THINGS ARE HAPPENING FOR OUR COUNTRY!”