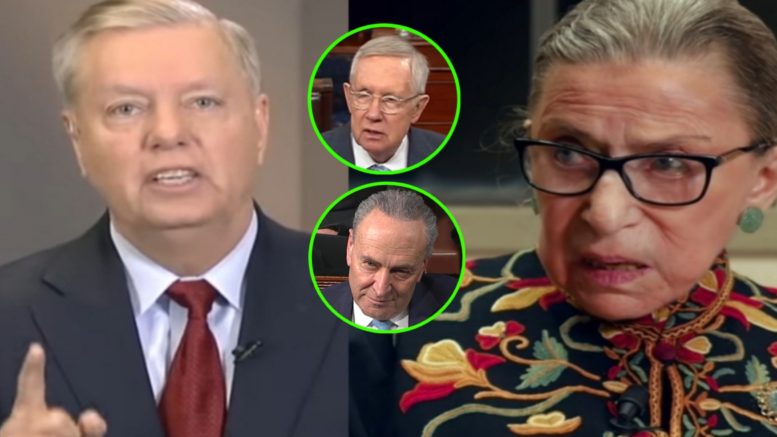 Senator Lindsey Graham, who is also now Chairman of the Senate Judiciary Committee, appeared on a Sunday program with Chris Wallace of Fox News to discuss some of the latest happenings in the world of politics.

The subjects he was interviewed on included the current government shutdown, the recent New York Times report on an FBI probe into Trump and the pending appointment of William Barr. But the most notable part came when he discussed the prospects of another vacancy to the Supreme Court.

Supreme Court Justice Ruth Ginsburg was recently diagnosed with cancer. And although doctors say they are confident she is cancer-free after her surgery, many analysts are skeptical on how much longer Ginsburg can continue.

Wallace brought up how Ginsburg “for the first time, astonishingly, in her quarter century on the court missed oral arguments.” He then turned attention to reports that say the White House is already putting together a short list to prepare for the replacement of Ginsburg.

In light of the Kavanaugh hearings, Wallace asked Graham how a “political circus” could be prevented the next time around.

Graham gave his warm wishes for Ginsburg’s health and hopes she can continue. Given the fact that Ginsburg is a liberal judge, Graham said he does expect push back from the left, since a conservative judge would likely be nominated to replace her.

He then gave a brief history lesson as to why the left’s decisions in the past could ultimately come back to haunt them.

Graham said, “My Democratic colleagues felt when they were in charge, we should confirm judges based on the majority vote. They changed the rules to accommodate President Obama. They tried to stack the court. They never thought Clinton would lose.”

He continued, “So what you’re gonna have is Harry Reid and Chuck Schumer’s desire to stack the court on their Democratic watch to come back to haunt them.” Video Below

Graham, with more fire in his tone, confirmed that if there is a vacancy,  a conservative will be picked to fill it. And he suspects it will be done along party lines.

Related Article: Graham RIPS Dems On Their Reply To Trump: ‘Was It Manufactured When Obama Wanted The Money?’

He declared, “This is what happens when you change the rules. This has come back to bite them. I predicted it would.” He added, “If there’s an opening on this court, I’m gonna be hell-bent to put a conservative to replace whoever steps down for whatever reason.”

Graham Reveals How The Past Will Come Back To Bite Dems With Next SCOTUS Pick (start at 9:50 mark)