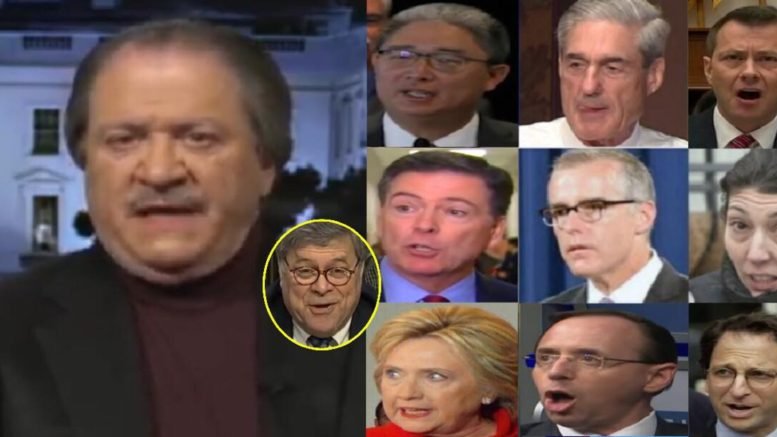 Specifically, they pointed to Andrew Weissmann, chief of the criminal fraud section of the U.S. Department of Justice. In June 2017, he was appointed to a management role on the 2017 special counsel team headed by Robert Mueller. (Videos Below)

Details about Justice Department official Bruce Ohr’s meetings with the author of the salacious anti-Trump dossier were shared by Ohr with his expansive circle of contacts inside the department — including senior FBI leadership and officials now assigned to Special Counsel Robert Mueller’s investigation.

Ohr gave a closed-door transcribed interview last August sharing details of his 2016 meetings with British ex-spy Christopher Steele, who authored the dossier later used to secure a surveillance warrant for a Trump campaign aide. The interview was part of the Republican-led House Oversight and Judiciary Committee probes, per Fox News.

According to Fox News, in a series of questions about his meetings with Steele, including one on July 30, 2016, and who he shared the information with, Fox News has confirmed the Ohr transcript stated: “Andy McCabe, yes and met with him and Lisa Page and provided information to him. I subsequently met with Lisa Page, Peter Strzok, and eventually (an FBI agent). And I also provided this information to people in the criminal division specifically Bruce Swartz, Zainab Ahmad, Andrew Weissmann.” (Videos Below)

During the interview, Victoria Toensing pointed out that Weismann was on the lower totem pole at the DOJ, meaning he was not a senior Justice official, but Bruce Ohr briefed Weismann and shared Dossier intel with him.

“He’s briefing Andrew Weissman? Andrew Weissman is the head of the fraud department. It has nothing to do with FISA applications. What was he doing there– unless he was a ‘Clinton-esta’ to find out all kinds of things.” Toensing asked.

Dobbs pointed out that the list goes on with officials fired, transferred and demoted with no prosecutions, further, nobody is being held accountable or brought to justice. (Videos Below)

Joe diGenova has a different opinion and thinks things will chance one William Barr is Attorney General.

“Well, I think that’s all going to change when Bill Barr becomes the Attorney General. I expect him to authorize grand juries into all of this if they’re not already being conducted. And to make them robust if they are not already robust now and to replace people who are not doing their jobs, including Mr. Huber.” diGenova said.

He pointed out, “What’s fascinating about the Ohr testimony is that he now establishes as a fact that the FBI was told, before the first application for the FISA warrant, that the information was unverified, unreliable and that Christopher Steele had an animus toward the President of the United States and that they needed to be careful, and we know they were not careful.”

“What he has done through his testimony is establish that there was a cabal– that the FBI senior and senior DOJ officials wanted to get Donald Trump regardless of the evidence. They wanted to spy on him. They succeeded in doing so by lying to a FISA court, which has now been established, and committing federal felonies in doing so.” diGenova explained.

“I expect Attorney General Barr, when he is confirmed, to impanel a Grand Jury to investigate all of this.” diGenova said bluntly.

#DrainTheSwamp – Joe DiGenova: Bruce Ohr established there was a cabal. FBI and DOJ wanted to get President @realDonaldTrump regardless of the evidence. They wanted to spy on him. They succeeded by lying to a FISA court. #MAGA #TrumpTrain #Dobbs pic.twitter.com/0U3ZtrOId1

(Related Article: While Facing Graham, Barr Discloses His Thoughts On FBI’s Anti-Trump Plot: ‘I Was Shocked’)