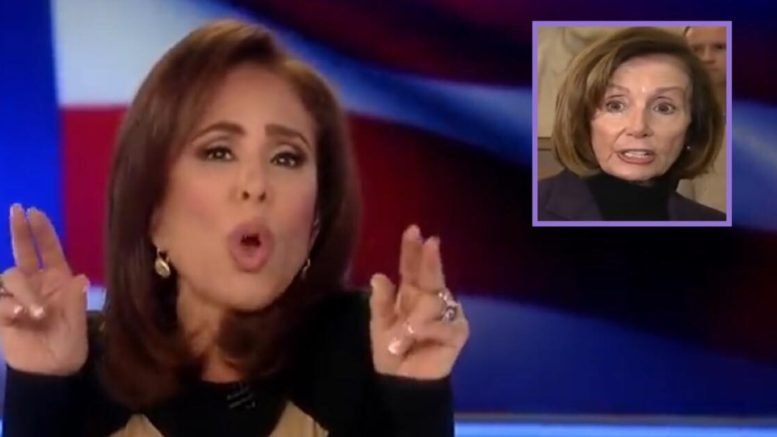 Saturday night on Fox News during her opening monologue on “Justice,” host Judge Jeanine Pirro ripped Speaker Nancy Pelosi (D-CA) after her refusal to come to the table to negotiate border security with President Donald Trump.

The Judge didn’t hold back and let everyone know exactly where Pelosi stands. (Video Below)

Judge Jeanine Pirro explained that Pelosi and other congressional Democrats cared more about illegal immigrants than Americans and called her a “hypocrite” and a “political operative.”

“Politicians are elected to represent us. They are here to protect our interests over their political interests. Refusal to try to work toward compromise is putting politics over people.” She said.

The Judge continued, “President Trump has been at the White House virtually every day working and waiting and trying to make a deal– bending, compromising and offering solutions. The Democrats not only disrespect him, they sometimes don’t even show up. They’ve refused his every overture, put a stake in the ground, proving that politics are more important than putting people back to work.”

“And as 800,000 federal employees face the loss of a second paycheck this Tuesday, the Democrats disregard their distress by not negotiating to end the partial government shutdown. And that, my friends, is a problem. She added, “It’s even bigger than that. They refuse to negotiate for people who live paycheck-to-paycheck. They don’t consider Americans whose lives, safety, economy, and social service agencies are drained by these uninvited illegal immigrants.” (Video Below)

“Saturday the president offered yet another compromise to reopen the government: There will be no concrete wall, only steel slat barriers; $5.7 billion for it; $805 million for drug detection technology; $800 million for humanitarian assistance; almost 3,000 additional border patrol agents; 75 new immigration judges; and a three-year extension for TPS and DACA.” Judge Jeanine said.

Jeanine explained that President Trump described in clear and direct language the human crises ranging from 300 of our children dying every week from heroin, 90 percent of which comes through those porous Mexican borders. (Video Below)

“Democrats – demon rats – are dug in to the theater of lies and hate, casting Donald Trump as evil while casting themselves as angels, supported by a mainstream media intent on publishing any anti-Trump story, however baseless or absurd. Journalistic standards be damned.” Judge Jeanine declared.

The Judge didn’t stop there as she continued to hammer Nancy and the Democrats.

“Your path is to disrespect Americans. And instead to respect those who violate our laws while you and your ilk raise pictures of furloughed federal employees when you won’t meet with the angel moms who come to your office with pictures of American children killed by illegal immigrants.” She said.

Jeanine continued, “So let me see if I understand this — an American mother shows a picture of a child murdered by an illegal immigrant and Chuck Schumer and his gang they come out and show pictures of federal employees – is there a moral equivalency there? Are you kidding? Are you working for Americans here or illegal immigrants? Or is it that you just don’t give a damn?”

“You vacation in Hawaii. Your buddies vacation with lobbyists in Puerto Rico during the shutdown. And you plan a jaunt to Europe while federal employees are trying to save every dollar to buy groceries. Admit it, you don’t give a damn!” The Judge exclaimed.

“Nancy, you’re a hypocrite, a political operative. Your mantra: Destroy the president of the United States. To hell with the tax-paying, hard-working Americans. Let them eat cake. I’ve got a junket to go on, an ego to assuage, and an electorate to ignore. And Nancy, if you’re too afraid to take a commercial flight, there are alternate ways to fly. Check this one out — it’s a broomstick and it’s tailor-made for you.” She fired back.

(Related Article: Amid Border Crisis, Judge Jeanine Drops The Mic: ‘The Time To Declare A National Emergency Is Now’)