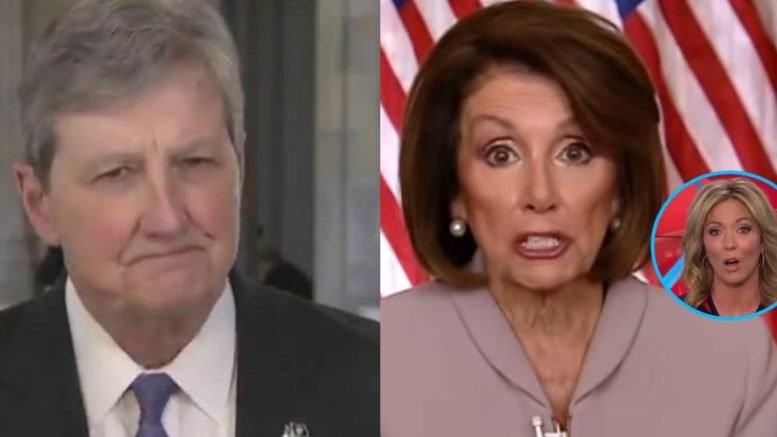 During her briefing, Pelosi dismissed the idea of any wall funding for what President Trump wants. (Video Below)

When asked directly about funding for a wall on Thursday, Nancy Pelosi became flustered with the question and said, “We’re not having a negotiation with that here. There’s not going to be any wall money in the legislation.”

(Related Article: Pelosi Says ‘There Will Be No Wall Funding,’ Trump Fires Back: ‘[She] Will Be Begging For A Wall’)

While speaking with Brooke Baldwin, Sen. John Kennedy weighed in on Pelosi’s remarks and explained, “She knows that the walls we have right now are working. She knows you can’t secure a 1900 mile border without barriers.”

“I think she doesn’t want to use the word ‘wall.’ That’s okay, she can call it a ‘Wang Doodle’ for all I care!” The Senator jokingly suggested. (Video Below)

Sen. Kennedy said that the President wants to build the wall in the places that are needed. “We’re not talking about a wall from one end to the other. Walls are placed strategically.”

Further, the Louisiana Senator pointed out that other measures are needed for border security such as better technology at ports of entry, more border control agents, more detention beds, and drones.

“But, it does include a wall, and I know it’s hard for the Speaker to say!” Sen. Kennedy expressed.

“Maybe she should call it a ‘Wang Doodle’,” He said again. (Video Below)

It’s not CNN thought without pulling out dirty tricks and a bias narrative to try to make President Trump look bad. Without hesitation, Baldwin brought up a poll that showed Republicans took a hit because of the shutdown.

Baldwin wanted to know if the shutdown was worth it.

“I think that’s part of the problem here, Brooke. I think so many folks here on Capitol Hill have been looking at this through a political lens. I’m not naive. I understand politics is important. But the real issue here is– it’s very simple– can you secure the border? Assuming you believe in border security, and I take all of my colleagues at their word that they do. And I doubt them sometimes, but I take their word. Can you secure a 1900 mile border without some kind of barrier?” Sen. Kennedy asked.

Brooke interrupted him and suggested that the President caved and then asked again, “was it worth it?”

The Louisiana Senator shot back and said, “Yes! It’s not over yet. Let me finish, Brooke. We’re not through it, number one. I happen to think border security is important. I think the reason we are having this debate is because there has been a 30 year bipartisan refusal. Both by big government and Ritz Carlton Democrats to refuse to enforce America’s immigration laws. Let me say it again: legal immigration makes our country stronger. Illegal immigration is illegal, duh!” He explained.

“And one way to stop it is to secure the border. You can’t secure the border without a barrier or a wall, or a Wang Doodle or whatever we’re calling it!” Sen. Kennedy doubled down. (Video Below)