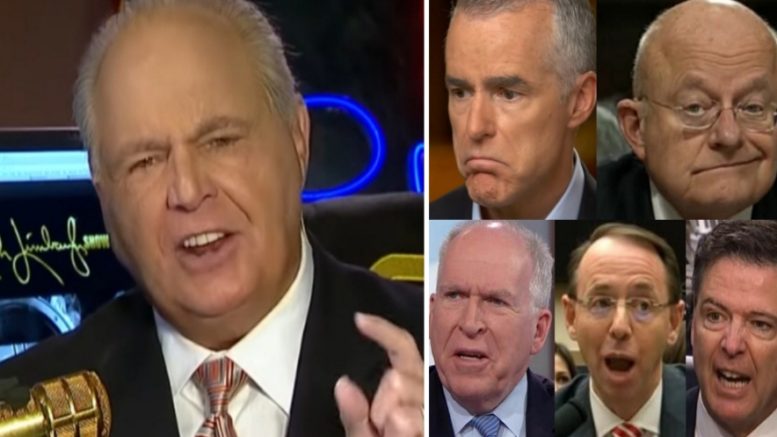 Radio talk show host, Rush Limbaugh, joined Chris Wallace of Fox News on what was a rare, yet explosive appearance as he sounded off on the latest turn of events in the political arena.

During the interview, Rush gave his insight on the way Trump went about securing funding for the border wall and who he thinks will ultimately be the Democrat Nominee for President, which is Joe Biden. But the most powerful part came when Wallace shifted the topic to Andrew McCabe.

McCabe is on record during a clip of his 60-minutes interview, saying he and Rod Rosenstein discussed the possibility of using the 25th Amendment to potentially oust Trump. And in his book, he mentioned how Rosenstein suggested using a wire to secretly record conversations with President Trump, which Rosenstein labels as “sarcastic.”

Wallace asked Rush what he thought about the latest revelations surrounding McCabe, Rosenstein and others, and why he refers to what went on at the FBI and DOJ as a “silent coup.”

Rush snapped back, “Because these people are unelected. They took it upon themselves to overthrow the election results of 2016, ignoring the potential real collusion and conspiracy between Democrats and Russians to undermine the Trump candidacy and Trump Presidency.”

He went further to claim he believes the Mueller investigation is a “cover-up” and is nothing more than a distraction for the public. Video Below

Rush pressed on to say that people who were unelected decided to turn against what Americans voted for because they didn’t like Trump and where he came from. And so they began, what Rush calls, “a systematic process to get him thrown out of office,” which he doubled to call a “silent coup.”

Related Article: Sara Carter Hints How Fmr. Obama Officials Are About To Pay For Their ‘White Coup Attempt’ Against Trump

Then in a defiant manner, Rush  said, “These guys, if you ask me, oughta be the ones in jail. They oughta be the ones under investigation. What they have done, working with agents of the Obama intelligence agencies, is simply unprecedented.” He continued, “This is one of the greatest political hoaxes that has ever been perpetrated on the people of this country certainly in a couple of generations.” Video Below

Rush Limbaugh Unloads On The ‘Silent Coup’ Against Trump (Start At 6:50 Mark)