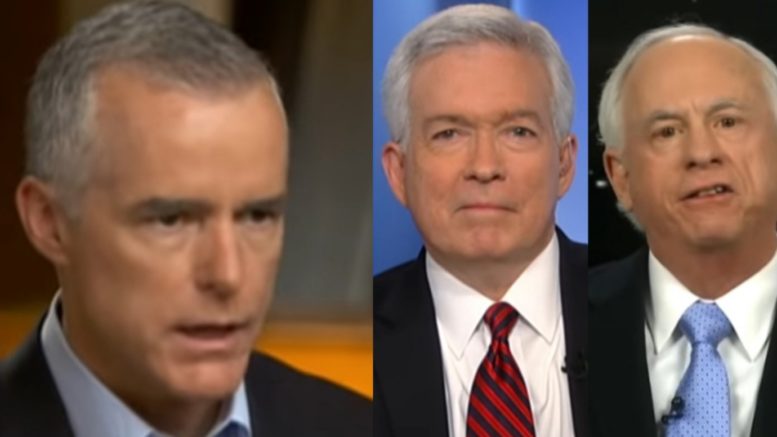 He backed up his claim by saying, “Suddenly, he’s a victim. After perpetrating, along with Jim Comey, severe damage to the FBI because of their, what we now know, clear biases.”He continued, “He’s trying to rehabilitate himself, but the damage is done, and he continues to do more damage.”

Brock pointed out how McCabe was deceptive when he claimed he had “clear and articulable facts to open up an investigation,” when he really did not. Brock said all of the reasons that McCabe gave for opening up a case were not legitimate or credible. Video Below

Terry Turchie got his turn to weigh in on McCabe’s interview, which he referred to as “embarrassing” and “egregious,” especially when McCabe discussed why he opened an investigation into the President.

Turchie said McCabe essentially admitted that he opened an investigation based on an unverified dossier, being angry that Comey got fired, and not liking the President’s demeanor and how he used words . And McCabe used all of that to go back and claim “the man was a great threat to America.”

Turchie went on to say that when looking back, it’s evident that the problem wasn’t that there was potential collusion between Trump and Russia, but that it was the FBI not following procedures laid in place that was the problem. Turchie said, “The FBI agents, who were working in those top positions, were not following the rules, guidelines or all of the policies that we put together for decades to protect this.” Video Below