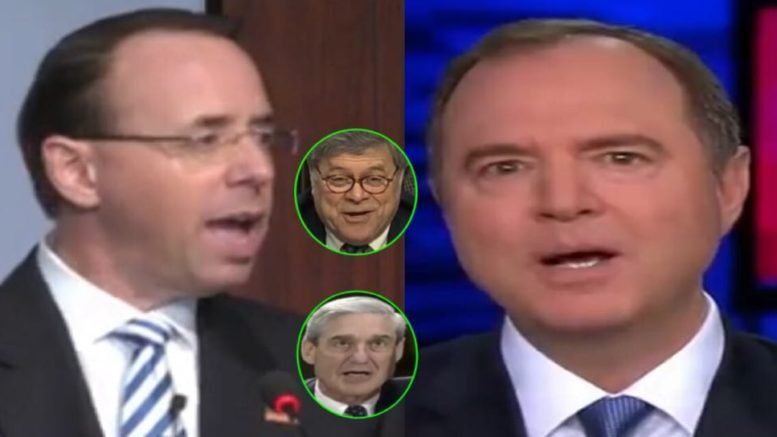 This comes amid Chairman of the House Intelligence Committee, Adam Schiff (D-CA), where he threatened to subpoena Mueller if necessary. (Video Below)

William Barr, who was confirmed as President Trump’s Attorney General this month, faced questions from lawmakers during his confirmation process about whether he would release Mueller’s findings to Congress and the public at the investigation’s conclusion.

Barr said he would release as much publicly as possible in accordance with the law, but he was careful not to commit to releasing Mueller’s final report in its entirety, which triggered Democrats.

(Related: After Hirono Suggests Recusing Himself, Barr Punts Her Idea Back To Honolulu)

During an appearance at the Center for Strategic and International Studies in Washington, D.C. on Monday, Rosenstein said “I think Attorney General Barr is going to make the right decision,” when asked about Mueller’s final report. (Video Below)

“We can trust him to do that. He has a lot of experience with this,” Rosenstein said, noting that Barr appointed special counsels during his first stint as attorney general, in the George H.W. Bush administration. “I think we can count on him to do the right thing.”

“We will bring Bob Mueller in to testify before Congress. We will take it to court if necessary, and end the end, I think the Department of Justice understands they’re going to have make this public.” Schiff said on ABC’s “This Week.” (Video Below)

Fox News Chief Intelligence correspondent, Catherine Herridge, explained that Attorney General William Barr will be writing a report of the summary findings, and he decides how much will be released to the public and how much is provided to Congress.

(Related: Catherine Herridge Emphasizes What To Expect If The Mueller Probe Is, In Fact, Winding Down)

“Rosenstein reinforced that position this morning and then said the regulations separately require the special counsel to notify Congress if actions are blocked by the sitting or acting Attorney General.” Herridge said.

“If the special counsel proposes to take an action and it’s overruled by the Attorney General or Acting Attorney General, we’re required to report that to the Congress.” Rosenstein said on Monday.

“We’re going to comply with those rules,” Rosenstein said. “The special counsel is a subordinate employee who reports to the attorney general or the acting attorney general.”

Rosenstein went on to argue that the public should be confident the investigation will be conducted independently.

“I can’t answer your question because that’s going to be a question that the attorney general makes as to what to do with whatever information is provided to him. But I can tell you that I think the regulation was appropriately written to ensure that we can be confident that the investigation was conducted in an independent way and that, if that special prosecutor believed something should be done and we prohibited him from doing it, there would be a report about that to Congress at the end.” He said.