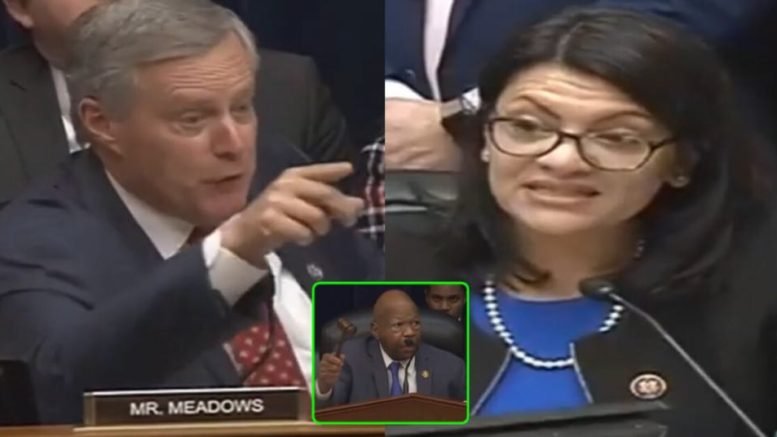 While President Trump is overseas in Vietnam, Democrats pulled out their dirty tricks to bring in their first “big witness,” who is is a proven liar, in hopes to start their “impeachment process” against the President. Further, to add to the circus, one member from the Democrat committee pulled out her race card.

During the hearing, things got heated when Reps. Rashida Tlaib (D-MN) and Mark Meadows (R-NC) clashed after she claimed a “racist act” was used by Meadows when he brought a black woman to disprove allegations of racism against President Trump.

Tlaib said, “Just because someone has a person of color, a black person working for them does not mean that they aren’t racist.”

“And it is insensitive– the fact that someone would actually use a prop, a black woman in this chamber, in this committee, is alone racist in itself,” she added.

Meadows had invited Lynne Patton, a Trump administration staffer, who is black, to the hearing to push back against Cohen’s allegations during his testimony that the President is a racist. (Continued Below)

Meadows immediately fired back at Tlaib, and he asked that her comments be stricken from the record as he believed it was a direct attack on him.

She repeated her comments and claimed that she wasn’t accusing Meadows of being a racist, but she believed it was a “racist act” to bring a black woman to the hearing to counter allegations of racism against President Trump.

Meadows was shocked and admitted, “There’s nothing more personal to me than my relationship– my nieces and nephews are people of color, not many people know that.” (Video Below)

“She came in because she felt like the President was being falsely accused,” he added.

(Related: Before The Testimony, Jim Jordan RIPS Cohen & Democrats: ‘You Have Stacked The Deck Against The Truth’)

Meadows said that he and Chairman Cummings have a personal relationship that’s not based on color and to even go down [in that] direction is wrong.

Cummings defended Meadows and admitted that Meadows is actually one of his best friends. “I know that shocks a lot of people. And I could see and feel your pain. I feel it.” He added, “I don’t think Ms. Tlaib intended to cause you that, that kind of pain and frustration.”

“As everybody knows in this chamber, I’m pretty direct. If I wanted to say that I would have,” Tlaib responded. “But that’s not what I said. But, I did say someone.”

(Related: Meadows Catches Convicted Liar Cohen In The Act Of Lying During Testimony: ‘Don’t Give Me That Bull!’)