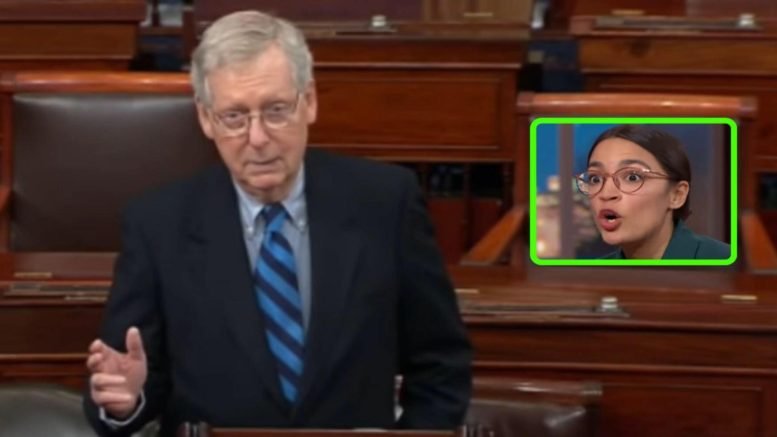 This comes amid Democrats jumping on their grand idea of unicorns, rainbows, and free everything for everyone turning into a socialist utopia.  (Video Below)

While speaking on the Senate floor, Mitch McConnell laid out good reasons the “New Green Deal” is destined to not pass votes.

He then pointed out that if that wasn’t enough, the Green New Deal would end American fossil fuel and energy production from nuclear power plants. “Of course along with all the jobs, they’d make both of those possible.”

McConnell savagely hit back at another prosperous idea Democrats proposed in their deal and said, “And according to background documents, [they have] plans for a government guaranteed income. And listen to this, a guaranteed income for those unwilling to work.” He emphasized, “All at the low price of an estimated… listen to this… 93 trillion dollars!” (Video Below)

The Senate Majority Leader then slammed their “medicare for all” idea coining it as a “one size fits all.”

“Of course, the next came the ‘one size fits all’ government run healthcare proposal.” McConnell added, “Medicare for none. It strips everything from our seniors Medicare program, but the name, and slaps that name on a new government run plan.”

“And, they’re so confident Americans will love their Democratic designed insurance that they feel the need to outlaw competing private insurance all together.” He further pointed out, “Just to make sure there is no competition. Democrats want to strip existing health care plans away from middle class families, even if they’re happy with their current coverage. And inevitably, hike taxes on those very families to pay for it.” (Video Below)

McConnell didn’t stop there as he mocked their deal and said it will never have a chance at seeing the light of day.

“As I’ve said Mr. President, none of these things Democrats have pulled off their far left wishlist have a chance of becoming law in 2019.”

Then, he knocked their proposal where the sun doesn’t shine and declared, “A lot of it sounds like a stand up comedy! But the underlying philosophy that all this represents, is no laughing matter, whatsoever.”