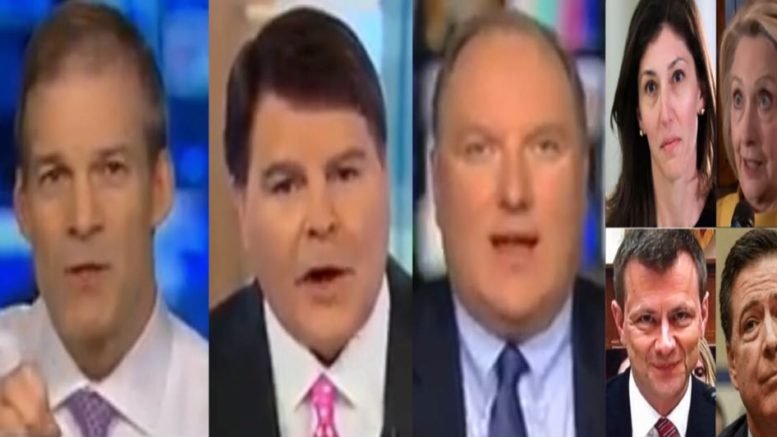 This comes after Rep. Doug Collins (R-GA) unleashed another set of transcripts, this time from Strzok’s deposition. (Video Below)

During the segment Thursday, Hannity began by explaining that there was information hidden from the FISA court about Carter Page and George Papadopoulos.

“Today is the day more than any other that you can see the dual justice system. You can see in [Peter] Strzok how the FBI took evidence of criminology, the negligent handling of emails and turned it into an exoneration. Then, [they] took the evidence of innocence and turned it into a criminal investigation against Donald Trump.” John Solomon said.

“What we learned is that these two men, the two focuses: George Papadopoulos, Carter Page, the people on whom they opened up the entire Russia collusion investigation, were captured talking to an FBI informant making exculpatory statements, spontaneous admission of innocence. They did not meet with Russia.” He explained.

Solomon added, “They did not hack emails with the Russians. And in fact, they would consider that treasonous, wouldn’t even be involved in it. Multiple statements of innocence. No evidence of that was told to the FISA court. And, it’s important to note these statements of innocence occurred in August and September of 2016, one month before the first FISA warrant was issued.” (Video Below)

Hannity pointed out that everybody in the FBI was warned about the dirty and salacious dossier. “They were also informed that Christopher Steele hated Donald Trump and Hillary paid for it. She used DNC money she was controlling to pay for this. The FBI paid for this, sadly. And, we also know Russian oligarchs paid for this phony dossier that Steele doesn’t stand by.”

Gregg Jarrett said, “We knew all along that Carter Page had not colluded with anybody. We knew the dossier was phony. We knew that George Papadopoulos hadn’t done anything wrong. But, now we know that the FBI truly knew all of this through their confidential informant.”

Jarrett explained that the law requires them to provide the FISA court with any exculpatory evidence. “Failing to do so can be a crime, not only that, but they didn’t verify as the law requires the information they were submitting.” He added, “Six different felonies may have occurred there.” (Video Below)

Hannity noted that there is so much more to come. “Once the flood gates open, it’s going to come cascading down!” He proclaimed.

Jordan declared, “That’s a lot not to share with a secret court! Especially, Sean, when you’re getting a warrant to on the other parties campaign. But that is exactly what happened. This has been wrong from the get go!” [Emphasized]

“That’s why these investigations are important and that we do what you said earlier. We have a real single standard in this country: shouldn’t be two standards, shouldn’t be just one set of rules for us regular folk and a different set if your name is Clinton, Comey, Lynch, Lerner, Page, Strzok. There ought to be one set of rules in this country and that’s equal treatment under the law.” Jordan demanded.

He pointed out that the swamp had zero evidence of collusion but instead went ahead and opened the Russia investigation.

Solomon urged President Trump to declassify the documents to show the American people the FBI’s activity for what it truly is and not for what it was made to look like for a two year mirage. (Video Below)

Before ending the segment, Hannity asked the panel, “Do you all agree with this statement, you can shake your heads. This is about to break wide open and many of these players are about to see a day of reckoning. Yes or no? Shake your head.”

They all shook their heads in the affirmative.

(Related: Gowdy Exposes The ‘Insurance Policy’ That Strzok, Page & McCabe Designed: ‘They Had A Confidential Informant That They Didn’t Want To Burn’)