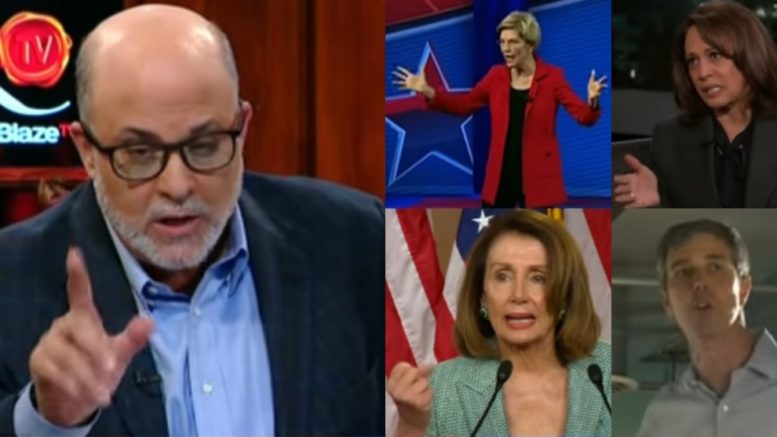 This comes after their push to abolish the Electoral College, lower the voting age, and stack the Supreme Court.

After Sean Hannity mentioned some of the recent pushes by Democrats to rid of the Electoral College and stack the Supreme Court, Levin launched his attack.

Levin explained why we have an Electoral College and wondered, “Why do I have to explain this to people who want to run for president of the United States?”

“There were states that had smaller populations and were not going to join the Union if the most popular states were going to control the entire country.” He noted, “We have an Electoral College that keeps peace in this nation.” (Video Below)

“We are a Republic, not a Democracy. We are not a ‘mobocracy.’ And what you see here is people that aren’t running under the Democratic party, they are running in the mob party!” He declared.

He further noted that Democrats now want illegal aliens to vote and asked, “Why wait for them to come a thousand miles into the United States? Why don’t we send absentee ballots to 7 billion people all over the world and say you don’t need to struggle to get to the United States. You can just vote in our elections.”

(Related: Huckabee Rips Gillibrand After She Offers To Give Illegal Immigrants Social Security: ‘Let’s Toss In A Car & Rent’)

Levin brought up their other idea of letting 16 years old vote and asked, “Why not lower it to 12, or 14, or 15? How stupid is that? Why are they doing that? Because they indoctrinate all these kids in highschool and so-forth and know how they are going to vote, Democrat.”

“We are only 3-4 weeks into this election and the Kooks are on full display.” He announced. (Video Below)

“That is quite a policy plan that the Democrats have!” He expressed.

Before concluding, Levin had a message for President and thanked him. “Thank you for being a Statesmen. What you’ve done in Israel will be remembered for a 1000 years.” He pointed out moving the embassy, taking on terrorists, and shredding the Iran Deal.”

He further took note of  4 Democrats won’t be speaking at AIPAC, which supports Israel.

“When they have an anti semite among them, they can’t even pass a resolution specifically condemning the anti semite by name. And yet, the number 3 person in the House of Representatives, yet again in that party, compared the President of the United States to Adolf Hitler. This is a sick party,” he said. “These are sick people running for president of the United States. There is no other explanation for this.”

(Related: Judge Jeanine SHREDS Pelosi For Appeasing Omar’s Behavior: ‘The Joke Is On You, Nancy’)