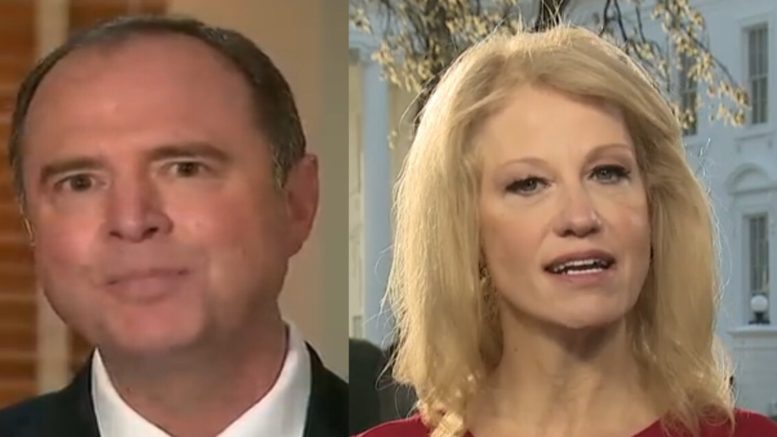 On Sunday, Adam Schiff claimed he believes there is still “significant evidence of collusion” tying the Russian government with President Trump’s 2016 presidential campaign, despite reports out of the Justice Department that Special Counsel Robert Mueller will not be recommending any further indictments in his investigation.

(Related: Huckabee Issues Schiff A Message On His ‘Evidence’ Of Collusion: ‘Show Up With A Box Full Of It, Or Shut The Heck Up’)

Kellyanne said Schiff “ought to resign today” for “peddling a lie, day after day after day, unchallenged and not under oath. Somebody should’ve put him under oath and said ‘you have evidence, where is it?” She also called him an oxymoron.

“He ought to resign today. He’s been on every TV show 50 times a day for practically the last two years, promising Americans that this president would either be impeached or indicted.” She suggested. (Video Below)

She also said those who pushed the Russia Trump collusion narrative should apologize.

“Those who let this lie fly for two years, haranguing and harassing and trying to embarrass and worse, those of us connected to the 2016 campaign, beginning with the President and his own family really do owe people — owe America an apology,” she added. (Video Below)

“You came up with nothing — no obstructive conduct, no collusion. No more indictments. And by the way, nobody named Trump or Kushner indicted, folks. And people would whisper in our ears ‘look out, don’t be in a meeting with them, everybody has got to duck!’ I mean what a bunch of nonsense. She said.

“You wouldn’t let the 2016 election go and now you are running up against 2020 and you got a big, ol’ nothing,” Kellyanne concluded.

(Related: Kellyanne Fires Back After Acosta Asks If Trump Will Tell The Truth: ‘You’re Such A Smart–, A Lot Of These People Don’t Like You’)