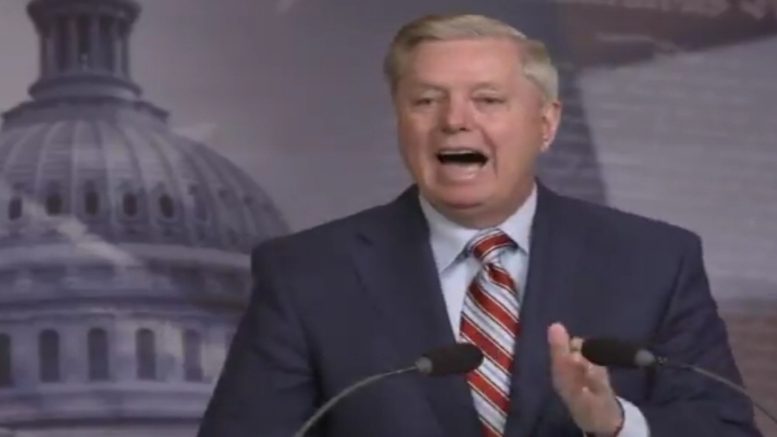 Now that the witch hunt is over, Graham said he plans to get answers about how the Russia probe was started and whether it was used as an excuse to spy on Trump’s presidential campaign. He called on Attorney General William Barr to appoint a special counsel to examine the issue.

Sen. Graham during the conference, blasted the FBI for their abuse and shady behavior. He also said he will look into the handling of the probe into Hillary Clinton’s use of a private email server as secretary of state, the Tarmac meeting with Bill Clinton and former AG Loretta Lynch, along with FISA abuse. “The FISA warrant issued against Carter Page based on a dossier prepared by Christopher Steele is at a minimum disturbing.”

He pointed out that he’s been calling since late 2017 for a special counsel to look into whether a FISA warrant was abused for political purposes and whether a counterintelligence investigation was opened up as a back door to spy on Trump’s presidential campaign in 2016.

Afterwards, the South Carolina Senator took questions from the press and fired back at one particular biased reporter who suggested Graham appeared to have a conflict of interest with the President. (Video Below)

“You brought up Jeff Sessions clear conflict of interest, and yet, you delivered a rousing speech in Mar-A-Lago over the weekend. Is that kind of public closeness to the President… does that not at least give the appearance of a conflict of interest in your role as as Chair in the Judiciary committee?” The reporter asked Graham.

“You’ve got to be kidding.” Sen. Graham fired back. [Emphasized]

“Did anybody ever ask during the Clinton impeachment that a Democrat was conflicted in speaking out on behalf of the President?” He asked. (Video Below)

“I am an elected political official. I am a Republican; I’ve went all over the country to speak to the Republicans. I want Trump to win. I’m Chairman of the Judiciary Committee. I do my job very responsibility.” Graham continued.

He explained that “this committee is going to allow Mr. Barr to come forward” adding that AG Barr will come forward and give the answers behind the Mueller report. “I stood by Mr. Mueller because I believe in the rule of law. There’s politics, and there’s the rule of law.”

“To suggest that if you’re a Republican and that you want Trump to win, somehow you can’t do your job, is absurd.” He added.

Asked if there's a conflict of interest due to his closeness to Trump, judiciary chair Sen. Lindsey Graham says, "You've got to be kidding."

"To suggest that if you're a Republican and that you want Trump to win, somehow you can't do your job, is absurd" https://t.co/jDcFIi8ll8 pic.twitter.com/76tUfjuVv8

(Related: When Pressed On Mueller’s Findings, Trump Has One Comment For The Media: ‘America Is The Greatest Place On Earth’)