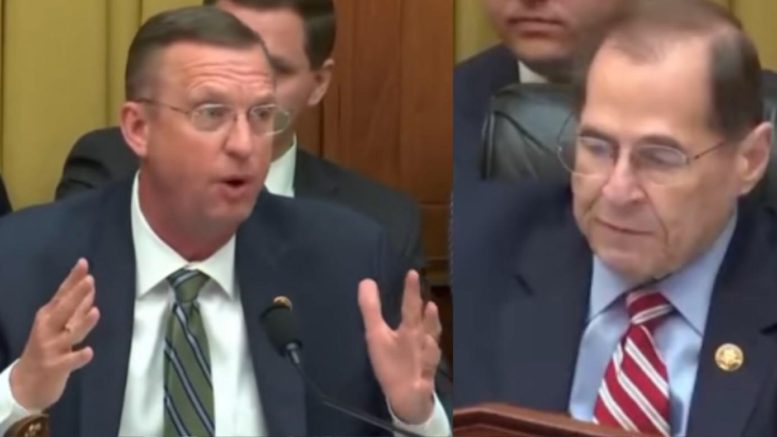 Judiciary Chairman Jerrold Nadler (D-NY) scheduled a markup Wednesday for the House Judiciary Committee to vote on authorizing subpoenas for the Mueller report.

AG Barr wrote in a letter to the committee that he would turn over a summary of the report by mid-April, once he and Mueller finished redacting it for “grand jury information, classified information, information related to ongoing prosecutions, and information that may unduly infringe on the personal privacy and reputational interests of peripheral third parties.”

However, Democrats have demanded that Barr provide the full 400-page report, along with underlying evidence. Democrats didn’t get what they want so the charades will continue to “get Trump.”

“The Attorney General’s entire mandate is to enforce the law and he’s expressly forbidden from providing grand jury material outside of the department, with very limited and narrow exceptions. Congress is not one of those exceptions, and the chairman knows it.” Collins said. (Video Below)

Collins pointed out Democrats are desperately searching” for something on the President. Instead of dealing with issues that this committee is authorized and should be dealing with, we’re moving on to subpoenas, and for several reasons, I cannot support.”

He said that the subpoena and the underlying evidence commands the AG to do the unthinkable: break his regulations, and break the law. “Now the only thing is, there’s a hope against hope that we’re going to find something!” He declared.

He noted that a new chairman will adopt a new standard of fairness and ignore existing law while demanding material that he once considered unfair to be released. (Video Below)

“This is reckless, it’s irresponsible, and it’s disingenuous.” Collins proclaimed. “It’s also confusing since the Attorney General is doing exactly what he said he would be doing: making as much of the report public as possible under federal law and departmental policy under regulations written by Janet Reno and other Democrats don’t require him– but in the name of transparency, he is.”

He said that the Attorney General may furnish the report as early as next week, but the chairman plows ahead. “What’s the rush? Spring break probably. The Attorney General has never said he’s not going to provide exactly what the regulations say he’s to provide. Why are we doing this again? I guess because we are going out of town, and we don’t want anyone to forget we’re doing something — we need a press release, we need to name people!” Collins expressed mocking the Democrats.

Collins further pointed out that Nadler has issued 5 subpoenas to people who have already agreed to cooperate. “The Judiciary Democrats conduct oversight via press release. They’ve embarrassed themselves by prejuding conclusions that the President obstructed justice.”

“Here’s what’s happening here: if you cooperate with this committee, you will get a subpoena. If you ignore it, Democrats will return the favor. This seems like a counterintuitive way to conduct oversight. But this sounds familiar. Remember the Acting Attorney General, Matthew Whitaker who agreed to come and sit here and yet, was rewarded with a subpoena? I’m not sure the purpose of a subpoena with this majority! It seems we want to use it, because it sounds good, but when it comes down to it, we don’t want to use it– and now we’re back at it again, because this all pre-emptive.” He explained. (Video Below)

The Attorney General has said he is going to give Congress the Mueller report under regulations. “But undoubtedly that’s not enough, undoubtedly that doesn’t make enough press releases. Why are we doing this? Because, we need to keep the story rolling. There’s some induino, there’s some possibility that maybe in this report.” Collins said.

“The Attorney General, although he is being smeared repeatedly is doing exactly what the regulations says, and for that, congratulations Mr. Attorney General, you get a subpoena!” He concluded while taking a jab at Democrats.

(Related: Nadler Caught On Camera Getting Called A ‘Loser’ While Addressing Press On Mueller’s Findings)