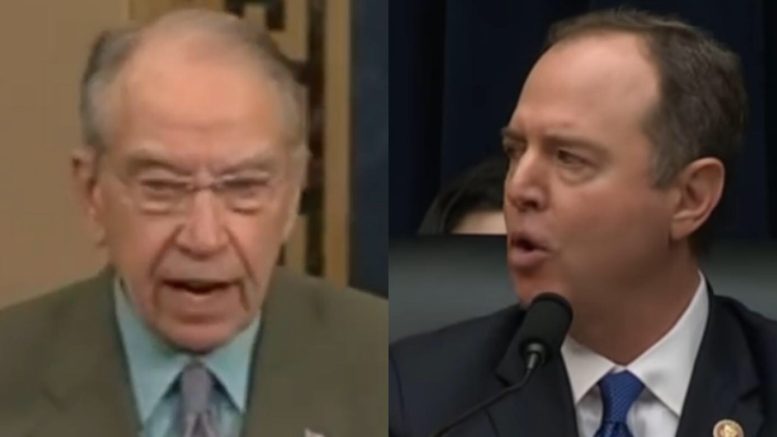 Thursday on the Senate floor, Sen. Chuck Grassley (R-IA) stepped up to bat for President Trump where he defended him against the Democratic mob, who insists “they must see the President’s tax returns.”

The request Wednesday by Massachusetts Rep. Richard Neal, who heads the tax-writing House Ways and Means Committee, is the first such demand for a sitting president’s tax information in 45 years, reported Fox News.

Neal made the request in a letter to IRS Commissioner Charles Rettig, asking for Trump’s personal and business returns for 2013 through 2018. “It is critical to ensure the accountability of our government and elected officials,” he said in a statement. “To maintain trust in our democracy, the American people must be assured that their government is operating properly, as laws intend.”

As reported by Fox News, the president’s congressional allies registered immediate and fierce disapproval. The top Republican on the House Ways and Means Committee, Kevin Brady, R-Texas, wrote to Treasury Secretary Steven Mnuchin to decry what he called Democrats’ “abuse” of their authority.

Additionally, Sen. Chuck Grassley came out of nowhere and told the Democrats why they will never get President Trump’s tax returns. (Continued Below)

Grassley said the Democrat’s proposal is filled with complaints about the president’s refusal to release his tax returns. Then, he listed off the reasons why the Democrats are crying to know every detail of his life.

“And that is suppose to serve as some kind of justification for demanding and releasing his tax returns?” Grassley asked. “Well, I can tell you, the law does not support that argument.” (Continued Below)

The Iowa Senator explained why their move will fail: “Under 26 U.S. Code § 6103 of the federal tax code, the tax returns of all Americans, even including the President of the United States, are considered to be private information.” He announced. “Without an individual’s permission, tax information can’t be released except under the most limited of circumstances.”

Grassley said the tax code reads that way “for a very good reason.” Congress reformed the IRS privacy law in 1976, not long after president Nixon left office. “Nixon used his power over the IRS to target his political enemies. And Congress, by passing that law in 1976, wanted to make sure that never happened again.” He said.

“But if you strip away all the pretense and trace this current effort back to its roots, that sounds an awful lot like what’s happening right now with the efforts by the members in the Ways and Means Committee.” He said bluntly.

Grassley also pointed out that in 2017, Democrats said the President’s tax returns should be released because ‘he stood to benefit from the tax reform’, but he knocked down their argument as Congress itself passed it, and they sent it off to the President to sign into law.

“Apparently, because the President is wealthy and successful, they figure he must’ve had a self interest in supporting that reform.” He said. (Continued Below)

He didn’t stop there and said that Democrats tried in another effort to get President Trump’s tax returns through the HR1 Bill they passed in the House, that ultimately got sent to the Senate.

He explained that the courts have been clear for decades– in that congressional requests for information such as President Trump’s tax returns, must have a legitimate legislative purpose.

“But, that’s where the Democrats come up very, very short. See, they don’t have a purpose; all they have are a lot of excuses.” He added, “It’s one of the worst [excuses] I’ve ever heard of.” (Video Below)