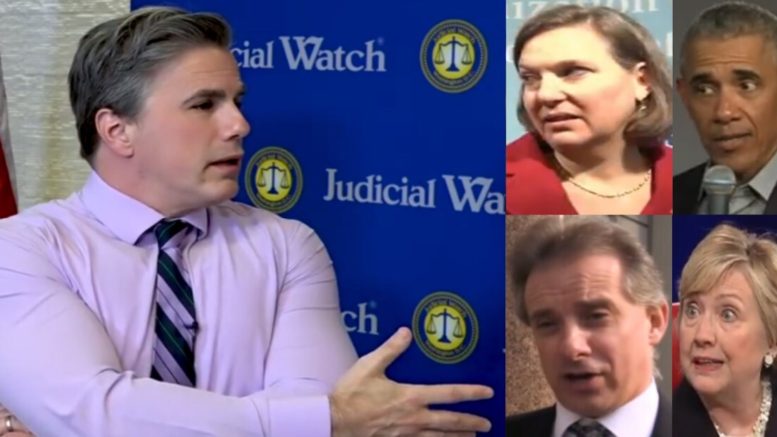 Judicial Watch is fighting for the American people and continues to do the heavy lifting exposing the truth and corruption within the deep state and swamp.

In a new press release from Judicial Watch, it states that they are suing the State Department for Obama Ambassador Victoria Nuland’s communications related to the anti-Trump dossier.

As reported by Judicial Watch, a Freedom of Information Act (FOIA) lawsuit has been filed against the U.S. Department of State for communications between Obama Assistant Secretary of State for European and Eurasian Affairs Ambassador Victoria Nuland and employees of Fusion GPS, as well as top ranking Department of Justice, FBI, and State Department officials.

JW further notes that Nuland served as Assistant Secretary of State for European and Eurasian Affairs from September 2013 until January 2017.

The watchdog group listed 24 names in association with Nuland and seeks the records and communications with ties related to the dossier. (Continued Below)

According to the press release, Judicial Watch seeks: Any and all records of communication between Ambassador Victoria Nuland and any of the following individuals between January 1, 2016 and January 25, 2017:

The author of the anti-Trump dossier, Christopher Steele, reportedly had developed long-standing relationships with senior State Department officials including Ambassador Victoria Nuland, “Between 2014 and 2016, Steele authored more than a hundred reports on Russia and Ukraine. These were written for a private client but shared widely within the State Department and sent up to Secretary of State John Kerry and to Assistant Secretary of State Victoria Nuland, who was in charge of the U.S. response to the Ukraine crisis.”

On February 4, 2018, in an interview on CBS’ Face the Nation, Nuland stated that she had been given details of the anti-Trump dossier directly from Christopher Steele, which she then referred to the Federal Bureau of Investigation:

[Steele] passed two to four pages of short points of what he was finding. And our immediate reaction to that was, this is not in our purview. This needs to go to the FBI if there is any concern here that one candidate or the election as a whole might be influenced by the Russian Federation. That’s something for the FBI to investigate. And that was our reaction when we saw this. It’s not our – our – we can’t evaluate this.

Nuland reportedly “green lit” the initial meeting about the anti-Trump dossier between Christopher Steele and FBI agent Michael Gaeta. Quoting from David Corn and Michael Isikoff’s book Russian Roulette, “The FBI checked with Victoria Nuland’s office at the State Department: Do you support this meeting? Nuland, having found Steele’s reports on Ukraine to have been generally credible, gave the green light.”

“We intend to find out how far the Deep State was willing to go in their effort to discredit then-candidate Donald Trump,” said Judicial Watch President Tom Fitton. “It seems the Obama administration engaged in a no-holds-barred attempt to clear the path for Hillary Clinton. Judicial Watch FOIA lawsuits have already shown the Obama State Department was corruptly targeting President Trump.”

Andrew McCabe knew. They all knew there was no evidence of @RealDonaldTrump Russia collusion. https://t.co/5box2bTQ92 pic.twitter.com/73pe5SPV8x

Thank you Judicial Watch and Tom Fitton! Drain the swamp.

You can also donate to Judicial Watch [HERE]

(Related: Tom Fitton Declares Trump Is Vindicated & Explains Why: ‘If There Isn’t An Apology In The Report, There Oughta Be’)