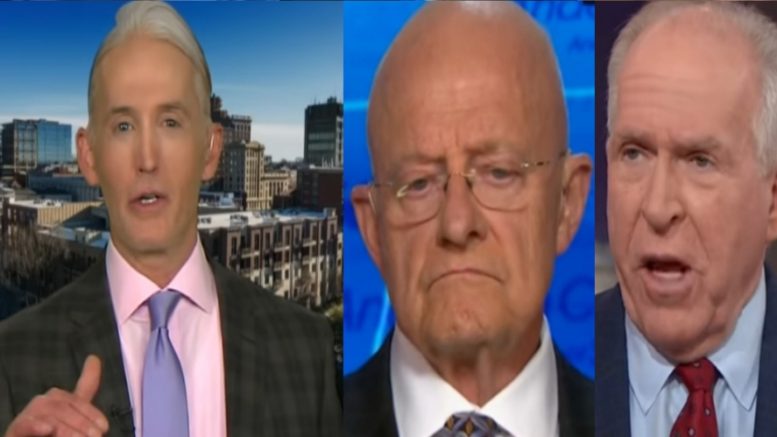 Attorney General William Barr’s use of the word “spying” to describe what happened to the Trump campaign was very bothersome for former Director of National Intelligence James Clapper and former CIA Director John Brennan.

In a recent interview, Clapper told CNN, “I thought it was both stunning and scary. I was amazed at that and rather disappointed that the attorney general would say such a thing. The term ‘spying’ has all kinds of negative connotations and I have to believe he chose that term deliberately.”

Brennan gave his reaction during an interview with MSNBC,  when he said, “I was very disappointed in what Attorney General Bill Barr said today about spying when he was referring to the investigation that was predicated, certainly, and that the FBI was trying to understand exactly what the Russians were doing. U.S. intelligence agencies were — spy against foreign adversaries so that we can understand the threat to our national security.”

He began by saying that the word “spy” is actually a synonym, or “first cousin” to the word “surveillance,” which is his word of choice. And that’s what happened to at least two members of the Trump campaign, according to Gowdy…they were surveilled.

Gowdy first took a swipe at Brennan by citing recent claims by the former CIA Dirrctor that he received “bad information.” He said, “I find it amusing that John Brennan said he received bad information. The reason that you don’t use bad information or to prevent you from using bad information is you’re supposed to investigate, corroborate, vet — none of which was done with the dossier.” Video Below

Gowdy then turned his attention to Clapper, to which he reacted, “What a drama king to use the words ‘amazed’ and ‘stunned’. What Barr said is we’re going to look into whether or not the powers given to the United States government were used to surveil a Presidential campaign. I would hope that everyone would want that to happen.”

He went on to say, “I am really, to use Clapper’s words, stunned that anyone would  not wanna know what was the factual predicate for the United States government to monitor the conversations and activities of two campaign officials, regardless if they were working for a Republican or a Democrat.”

Gowdy concluded that critics of Barr are only upset because of what was summarized in the Mueller report (no collusion or obstruction), and his decision to see if the origins the Russia probe were carried out lawfully. Video Below

Related Article: Barr Reveals Why He Formed A Team To Look Into FBI’s Handling Of The Russia Probe: ‘I Think Spying Did Occur’