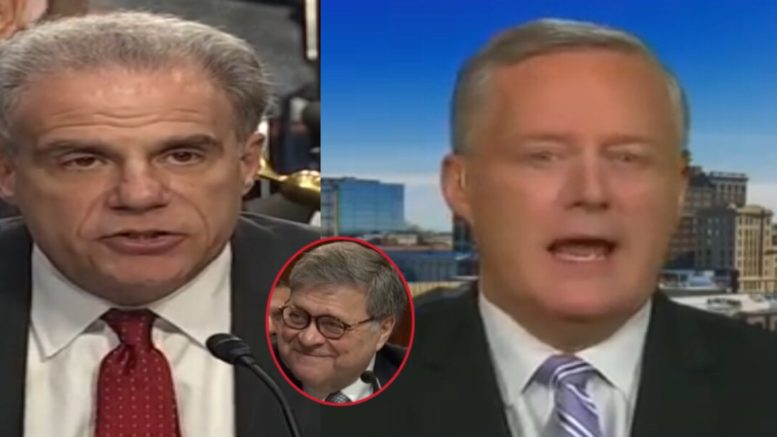 Congressman Mark Meadows (R-NC) joined host Maria Bartiromo on Fox News’ “Sunday Morning Futures” where he said that he expects the Justice Department’s inspector general to issue criminal referrals as part of an investigation into the FBI’s possible abuse of the surveillance courts during the Trump-Russia probe.

This comes after Attorney General William Barr told Congress on Tuesday that he anticipates the inspector general, Michael Horowitz, to issue a report in late May or June.

On March 28, 2018, Horowitz opened an investigation into whether the FBI and Justice Department complied with legal requirements to obtain a Foreign Intelligence Surveillance Act (FISA) warrant against Trump campaign adviser Carter Page.

“We’re fully anticipating that the [inspector general’s] report will come out as Attorney General Barr said in the next four to six weeks, and I think it’s highly likely that we’ll see criminal referrals coming from them that will correspond with what Chairman [Devin] Nunes has already put forth,” Rep. Meadows announced.

(Related: Mark Meadows Hints At Even More Criminal Referrals By Devin Nunes: ‘They Will Be Held Accountable’)

Meadows said that he and Rep. Jim Jordan (R-OH) met earlier this week with Horowitz. Both have expressed confidence in Horowitz’s work, and have heightened expectations that the investigation will be favorable to Republicans. (Continued Below)

The North Carolina Congressman said that he believes that Horowitz’s report will also focus on FBI leaks to the media. He also said that the bureau would leak information to the press to plant stories and then use those stories to justify additional investigations, as well as access to a FISA warrants.

“So what we would find is people within the Department of Justice, primarily the FBI, would actually give information to the media, then those reports would actually come out and they would say ‘wow, we have these reports now,’ and then they would take the actual reports and use those as the probable cause to do a further investigation,” Meadows said.

“It was a big circular reasoning, you’ll see all of that come out, I believe, when inspector general’s report comes out.” He added. (Continued Below)

Meadows also said that Attorney General William Barr is spot on to expand the scope of his investigation, because it will “go beyond what Michael Horowitz and DOJ can do.”

Barr will be able to look at the State Department, CIA and others in the intel community that were involved. “It was not just a few people in the CIA, it was a coordinated effort with the intelligence communities outside the FBI, and to the extent of that, I think AG Barr is gonna look at that.”

(Related: Devin Nunes Drops Hints On Who His Referrals Involve: ‘If I Gave You Seven Guesses, You’d Probably Get The Five’)