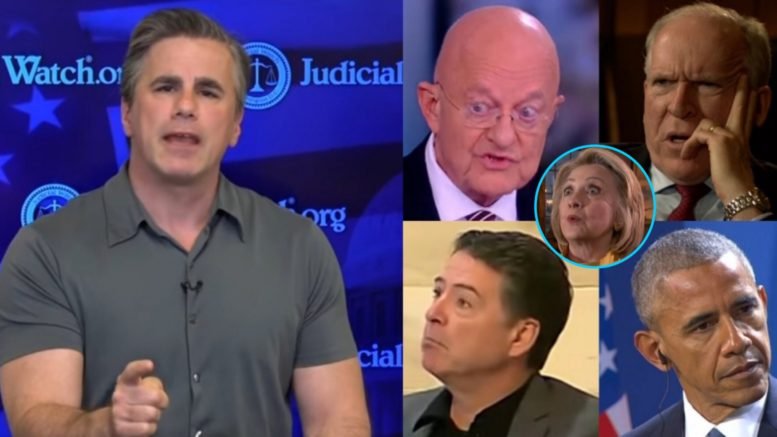 He further explained that the swamp is “hiding something”, and suggested they may end up going directly to jail. Do not pass go, do not collect $200.

Attorney General William Barr testified last week on Capitol before the before the Senate Appropriations subcommittee, and he believes “spying did occur” on the Trump campaign in 2016. Barr vowed to review the conduct of the FBI’s original Russia probe — and the focus of a related internal review shifted to the role of a key FBI informant.

Asked about by spying, Barr announced, “I think spying did occur. The question is whether it was adequately predicated. I think it’s my obligation. Congress is usually very concerned with intelligence agencies and law enforcement agencies staying in their proper lane.” Barr also noted that “spying on a political campaign is a big deal.”

(Related: Barr Reveals Why He Formed A Team To Look Into FBI’s Handling Of The Russia Probe: ‘I Think Spying Did Occur’)

Tom Fitton began by explaining that Democrats are trying to shift the narrative and place blame on Barr for not revealing the full Mueller report yet. Barr testified during his confirmation that he would indeed release all they he could, according to law. (Continued Below)

Fitton described Democrat’s behavior as “noise” to distract from the fact that Mueller has concluded that there was no collusion between the Trump campaign and Russia– to influence the 2016 presidential election.

“I have to say, even I’ve been been struck by the irrational… I don’t even know what the word is– the response to one of Barr’s testimonies last week. The immediate action from the left wasn’t to say ‘well there may have been spying, but it was appropriate.’ Fitton declared, “They’re arguing over whether there was spying or not!”

“I frankly don’t know what to say to that. That to me– is like talking to a crazy person. Yes, the sun is in the sky. Yes, there was spying on the presidential campaign of candidate Trump.” The Judicial Watch president expressed. (Continued Below)

Fitton went on to mention how former FBI Director James Comey, downplayed the word “spying” and seemed confused about the usage of the word. Comey instead, sought to use the term “surveillance.”

“That’s crazy town; that’s crazy talk! And it suggests that there’s something there they are desperately seeking to hide. Because they recognize politically to say that the Obama administration ‘spied’ on the Trump campaign is to condemn the activity. They know that you know — there’s no reasonable basis for the Obama administration to take the unprecedented step of spying on the candidate of their political opposition. There was never a good faith basis to do so.” Fitton explained. “And even if there was a good faith basis to do so, they shouldn’t have done it!” [Emphasized]

Fitton said they’re upset at the idea of the Attorney General of the United States having some questions about the spying and may do an investigation.

“Because they know if a real serious investigation is done, Democratic party operatives will end up in jail! Senior government officials from the Obama administration will end up in jail. The conduct of the President of the United States, Barack Obama, will be the subject of criminal investigations.” Fitton declared. [Emphasized]

He then listed, Joe Biden, Susan Rice, the DNC, Hillary Clinton, James Comey, James Clapper, John Brennan, Andrew McCabe, Peter Strzok, Lisa Page, and John Kerry. “All of them were involved in this spy operation against the President. No doubt it was being run out of the Obama White House!” Fitton said with certainty. (Continued Below)

Fitton said it didn’t stop when Trump won the election, because Judicial Watch received the documents proving otherwise and stated that Robert Mueller was benefiting from the illicit spying into Trump, as well.

“It was a spy operation targeting candidate Trump and then President Trump. It wasn’t just the FISA warrants. They were using national security letters. They were using informants to target the campaign and entrapt individuals associated within the campaign. And then, they targeted Carter Page. All of that was spying and they know none of it was justified. Which explains the irrational attacks on the Attorney General of the United States.” He said.

Fitton also named the Democratic establishment and their liberal allies in the media, who are complicit in the criminal activity, which not only included the spying, but the leaking of the results of the spying. He pointed out that those are violations of law as well.

“I just hope the Attorney General is brave enough and strong enough to pursue a serious criminal investigation here. We need prosecutors, we need grand juries, we need all of the hallmarks of a serious investigation to force these people to own up to what they did and explain what they did.” The Judicial Watch President urged.

He concluded, “The President is a crime victim. Other targets of spying are crime victims. And now, they dont’ want us to use the word ‘spying’. This is [an] Orwellian attack on the Republic, an Orwellian attack on the rule of law. We’re suppose to check our brains at the door to protect this Democrat mob operation that was targeted at President Trump.” (Video Below)

Tom Fitton dropped off a video on Twitter Monday as well and wrote, “CRIMES: If a serious investigation of #Spygate is conducted, then senior Democratic operatives and Obama and Deep State government officials may end up in jail. @RealDonaldTrump is a crime victim! @JudicialWatch”

CRIMES: If a serious investigation of #Spygate is conducted, then senior Democratic operatives and Obama and Deep State government officials may end up in jail. @RealDonaldTrump is a crime victim! @JudicialWatch pic.twitter.com/ZGBaOzJDNd

(Related: Fitton Slams Democrat Leaders: ‘These Are Folks That Are Defending Criminal Activity by Their Party’)