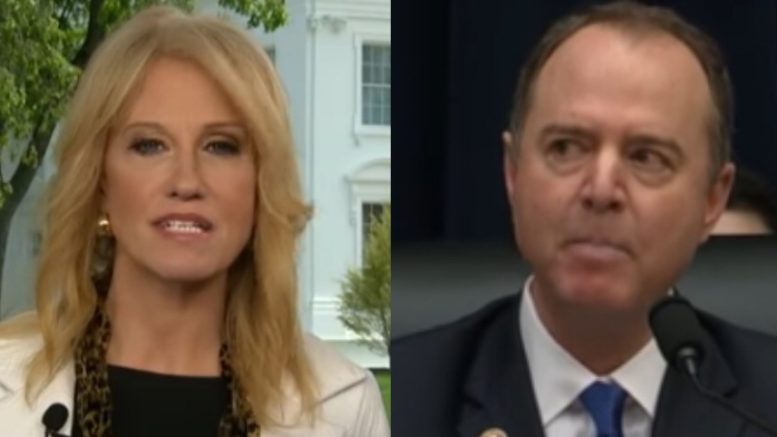 The Mueller report has been officially released to the public after Attorney General William Barr held a press conference Thursday morning outlining the major takeaways.

Barr affirmed once again that Special Counsel Robert Mueller found no evidence of collusion between members of the Trump campaign and the Russians during the 2016 presidential election, and in announcing the conclusion, the left wing media hacks and Democrat lawmakers are upset.

Counselor to the President, Kellyanne Conway, joined Harris Faulkner on Fox News’ “Outnumbered Overtime” Thursday, where she weighed in on the report, along with blasting Rep. Adam Schiff (D-CA).

“This President and his team have been completely compliant, and what is the net result? The net result is some $35 million and 22 months later we know what we already knew, which is that this President won that election fairly and squarely.” Kellyanne said.

The counselor to the President explained that nobody on the Trump campaign aided or embedded in Donald Trump’s presidential campaign and the report makes it very clear. (Continued Below)

Then, Kellyanne blasted the Democrats and their friends in the mainstream media for “putting so much into this” and ultimately they got “nothing.” She expressed, “They figured they could indict or impeach or frog-march [Trump] out of office– not happening everybody. Clean bill of heath.”

Kellyanne also said she was the first person in the White House to call for the resignation of Rep. Adam Schiff from the Intelligence Committee Chair.

“I’m gonna double down on that. Not only should he resign, he should produce the evidence that he says he has.” Kellyanne suggested. “If he has evidence of collusion that somehow the Special Counsel couldn’t find for 22 months and $35 million of our money, I would ask Adam Schiff to produce it. He ought to put up or shut up!” (Continued Below)

Kellyanne previously called on Schiff to resign last month and said, “Schiff “ought to resign today” for “peddling a lie, day after day after day, unchallenged and not under oath. Somebody should’ve put him under oath and said ‘you have evidence, where is it?” She also called him an oxymoron.

(Related: Kellyanne Conway Indicates Why The Time Is Now For Adam Schiff To Step Down: ‘He Ought To Resign Today’)

Rep. Adam Schiff took to twitter grandstanding after the report was released and posted a letter for Robert Mueller to testify, further adding, “The House Intelligence Committee has formally invited Special Counsel Mueller to testify on the counterintelligence investigation. After a two year investigation, the public deserves the facts, not Attorney General Barr’s political spin.”

Speaker Nancy Pelosi (D-CA) and House Judiciary Committee Chairman Jerry Nadler (D-NY) also took swipes at the Attorney General on Thursday, and demanded that Special Counsel Robert Mueller appear before the committee “as soon as possible” and no later than May 23. (Continued Below)

The House Intelligence Committee has formally invited Special Counsel Mueller to testify on the counterintelligence investigation.

(Related: Reporter Asks Why Mueller Isn’t At The Press Conference, Barr Fires Back: ‘It Was A Report He Did For Me’)