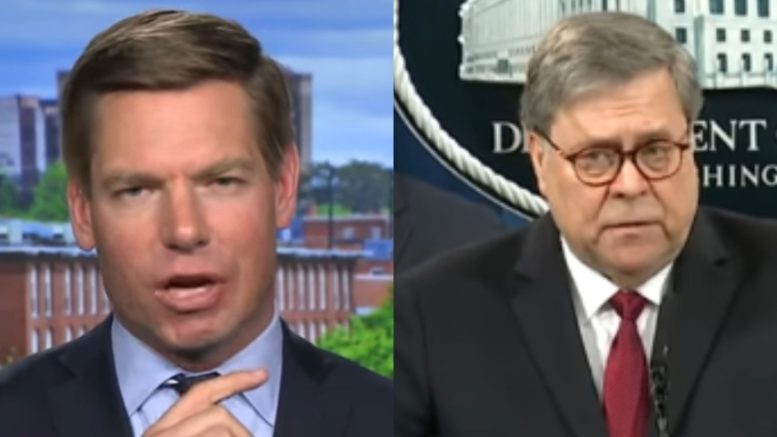 Rep. Eric Swalwell, who recently announced his 2020 Presidential bid, is clearly irritated by both what he concluded from the Mueller Report and Attorney General William Barr’s handling of it.

And he put his irritation on full display for the American public during a live interview with MSNBC after the report was released.

It was strong words out of the representative from California, who claimed, “This President is a double-digit instructor, according to the Mueller Report, in a number of ways he sought to obstruct.”

Without giving specifics to back up his claim, Swalwell turned his attention to Attorney General Barr, who he claims is only concerned about representing Trump.

After confirming with the host that he really thinks Barr should resign, Swalwell said, “He (Barr) lost the credibility of the American people.” Video Below

He went further to say, “[Barr] is not recused from an investigation where he should be recused. He’s embedded deep within the Trump team and that effects the credibility that the Attorney General must have.”

Related Article: Kellyanne Conway Renews Attacks On Adam Schiff, Calls On Him To Resign: ‘He Ought To Put Up Or Shut Up!’

Swalwell stopped short of saying the President should be impeached and left that up to Chairman Nadler, however he declared Trump “acted guilty and there are consequences for the way he and the people on his team acted.” Video Below