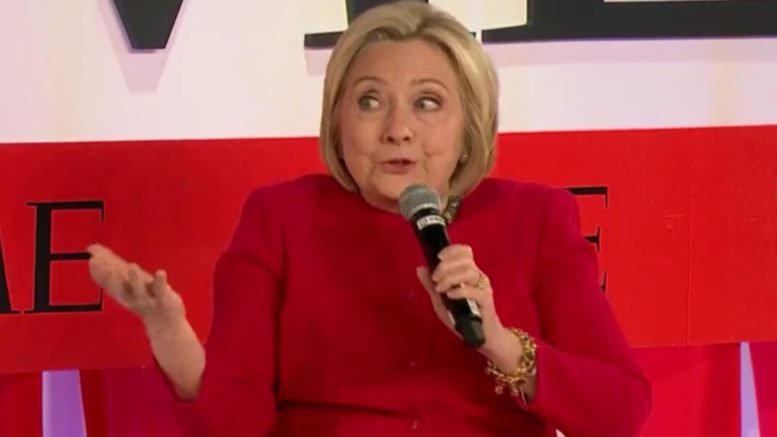 Hillary Clinton emerged from the swamp and spoke during the TIME 100 Summit in New York on Tuesday and criticized Russian efforts to interfere with her presidential bid.

“I think there is enough there that any other person who had engaged in those acts would certainly have been indicted, but because of the rule in the Justice Department that you can’t indict a sitting President, the whole matter of obstruction was very directly sent to the Congress,” Clinton said.

“As I read [Mueller’s report] what I thought it said was, ‘Look, we think he obstructed justice… but we’re under the control of the Justice Department.’” She added.

Then, she used Jerry Nadler’s talking points about “Congress” looking into the matter. (Continued Below)

Hillary Clinton bought and paid for the Steele dossier, to smear Trump during the campaign. It was given to the FBI and DOJ and then leaked to the media. The Obama DOJ used the dossier to obtain FISA warrants to spy on the Trump campaign. The Special Counsel reported that the dossier was in fact, false and fake.

(Related: Collins Slams Nadler In A Letter For ‘Promoting A Wildly Inaccurate Narrative’ On The Mueller Report)

Further, this is coming from the same woman who destroyed 33K emails, used bleach bit, and destroyed blackberries with a hammer and was let off the hook by Obama’s Justice Department and former FBI Director, James Comey. (Video Below)

“I think there is enough there that any other person who had engaged in those acts would certainly have been indicted.” @HillaryClinton on whether Donald Trump obstructed justice or not at the #TIME100 Summit https://t.co/LesjLJH44j pic.twitter.com/rRg2MnEmA9

(Related: Sara Carter & Co. Confirm ‘Indictments’ That Are About To Hit Former Obama Officials: ‘It Will Be An Avalanche’)