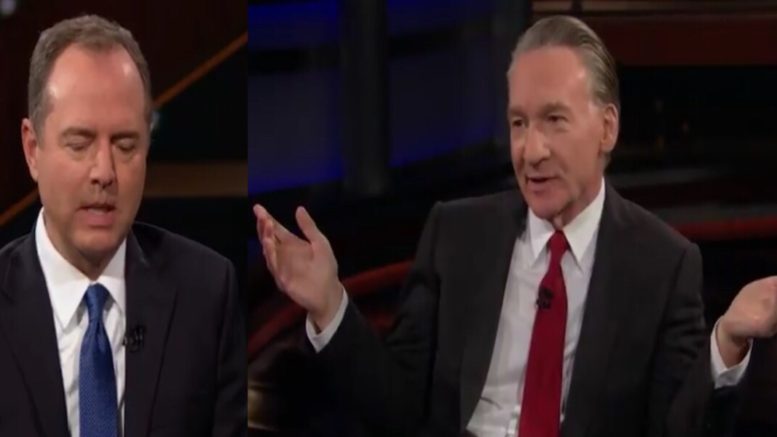 Rep. Adam Schiff (D-CA) spoke with host Bill Maher on Friday night where he proved to be the clown he is.

The subjects were focused on President Trump and the Mueller report, but Maher surprisingly called out Schiff to his face after his years of peddling lies.

During the interview, Bill Maher explained to Adam Schiff that the Mueller report essentially was the Democrats’ “big gun” to take down President Trump and it flopped.

He clarified by adding, “I think in the eyes of people who don’t follow it that closely, which is most of the country. Here’s the thing about Bob Mueller: he’s like the last person, the last thing in America, that left and right agreed on. Left and right basically agreed, this is the guy of honor, this is an honest guy, this is an honest broker. Whatever he says, goes.”

Mahar suggested that American’s are not into details and said of the report, “Don’t read it to me, Bob, just give me a thumbs up or thumbs down.” He added that it was basically a thumbs down. (Continued Below)

Bill Maher asked, “If you couldn’t impeach before, how are you going to impeach after, or should you?”

Stalker Adam Schiff stumbled upon having to answer whether or not Congress will move to impeach President Donald Trump, but after getting called out, he had to regain his “street cred.” (Video Below)

Schiff said he’s not there on impeachment yet, but he made a point of saying if they ultimately don’t, it sends a message that the obstructive conduct laid out in the Special Counsel Mueller report “is non-impeachable.”

“At the end of the day Bill, there’s only one way to deal with this problem, whether we impeach him or not, and that is to vote his ass out of office.” He said. (Video Below)

(Related: Tom Fitton: ‘Why Is Adam Schiff Still Chairman Of The Intelligence Committee?’)