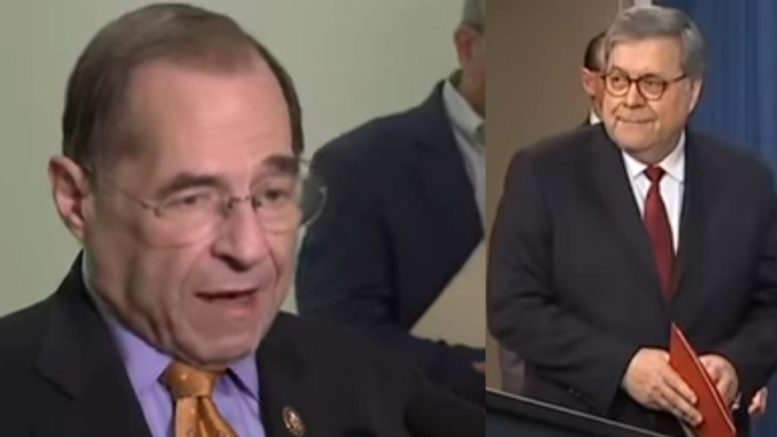 House Judiciary Chairman Jerry Nadler (D-NY) is now threatening to subpoena William Barr after the Attorney General is taking issue with the hearing format that this set for this week’s hearings.

This comes after Barr reportedly sparred with congressional Democrats on Sunday over the conditions for his highly anticipated testimony on special counsel Robert Mueller’s report.

William Barr, who Democrats have accused of protecting the President, wants to be questioned only by lawmakers on the committee– not by their staff and lawyers.

“The Attorney General agreed to appear before Congress. Therefore, members of Congress should be the ones doing the questioning,” Kerri Kupec, a Justice Department spokeswoman, said in a statement Sunday. “He remains happy to engage with members on their questions regarding the Mueller report.”

However, Nadler wants to give the committees’ attorneys a chance to question Barr saying that “It’s not up to Barr to dictate the terms of the hearing” and suggested that the Attorney General is “afraid of something.”

Nadler said on Monday, “If the Attorney General is afraid to subject himself to questions where he can follow up, that may indicate lack of confidence in his own position.” He added, “And more to the point, we have to get to the bottom of these issues. That’s why we’ve called him in, and it’s not up to the Attorney General to tell the committee how to conduct its business.” (Continued Below)

Nadler also claimed that the White House is stonewalling Congress.

“The President said he’s directing witnesses not to appear and to oppose subpoenas and obviously that’s obstructing oversight and is trying to make the President see a monarchy to get rid of congressional accountability.”

(Related: Nadler Caught On Camera Getting Called A ‘Loser’ While Addressing Press On Mueller’s Findings)