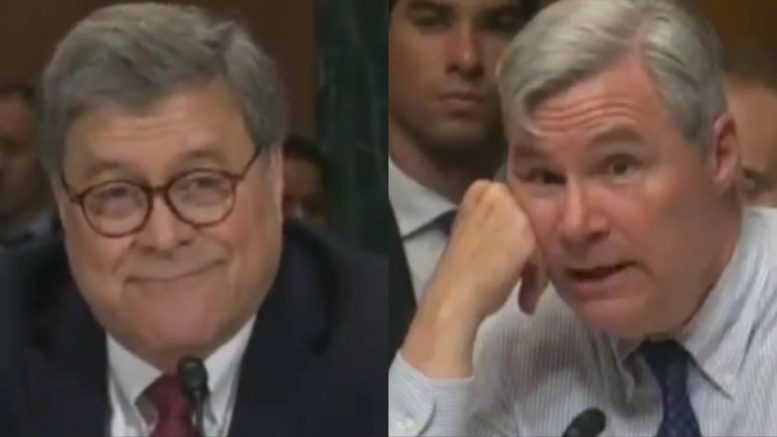 Barr defended his usage of the term “spying” from his testimony before Congress last month and said that he doesn’t believe the word has a negative impact.

Democrats are running scared because the Attorney General is going to investigate exactly what happened during the 2016 presidential election into the matters of the Trump campaign being targeted and surveilled.

“I don’t think spying has any pejorative at all,” Barr said in response to a question from Sen. Sheldon Whitehouse (D-R.I.).

The Attorney General said he considers the term to encompass all kinds of surveillance.

“I’m not going to back off the word ‘spying,’ ” Barr said, noting that the word is also frequently used in media reports and the press. (Continued Below)

Barr faced criticism from Democrats who claimed that the attorney general’s use of the term to describe surveillance relating to the Trump campaign in 2016 indicated that he was biased toward the president, who has, in turn, claimed that the Justice Department is biased against him, reported The Hill.

Sen. Whitehouse suggested that Barr’s term of “spying” is not commonly used in the DOJ.

The Attorney General shot back with laughter and declared, “It’s commonly used by me!” (Video Below)

Barr pressed on the use of the word "spying" because "it's not commonly used by the department."

His answer: "Well, it's commonly used by me." pic.twitter.com/MzdosI3TIH