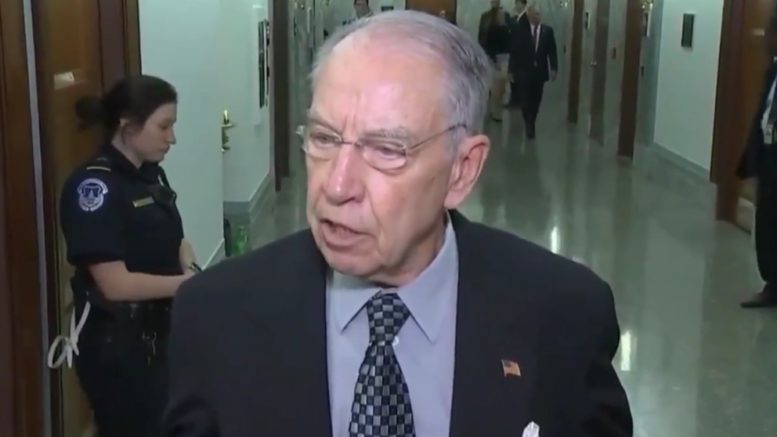 On Wednesday, Chuck Grassley was met by a reporter after the Senate hearing with Attorney General William Barr.

The reporter brought up Special Counsel Robert Mueller’s rumored concern with Barr’s handling of the report.

The reporter said that the first time Barr appeared on front of Senators regarding the Mueller report, he said Mueller had no concerns despite having a letter and a phone call with the Special Counsel that may suggest otherwise.

He initially stated, “He had that conversation and you heard him say, and I have to assume that Mueller said it to him, that he was only concerned about how the media played it.”

“So I think here’s where we are,” Grassley continued. “The Democrats and you folks in the media are not concerned about the report. I think you’re concerned the results weren’t what you expected.”

Related Article: Blumenthal Gets Da Nang Dick Treatment After Demanding Notes From Barr: ‘Why Should You Have Them?’

He then polished her off when he said, “And I think you were finding out that everybody sold a bunch of snake oil and now the jig’s up.” And he walked off. Video Below

"Here's where we are. The Democrats and you folks in the media are not concerned about the report. I think you're concerned about the results weren't what you expected. And I think we're finding out that everybody was sold a bunch of snake oil, and now the jig is up!" – Grassley pic.twitter.com/QGGXO3lK8t