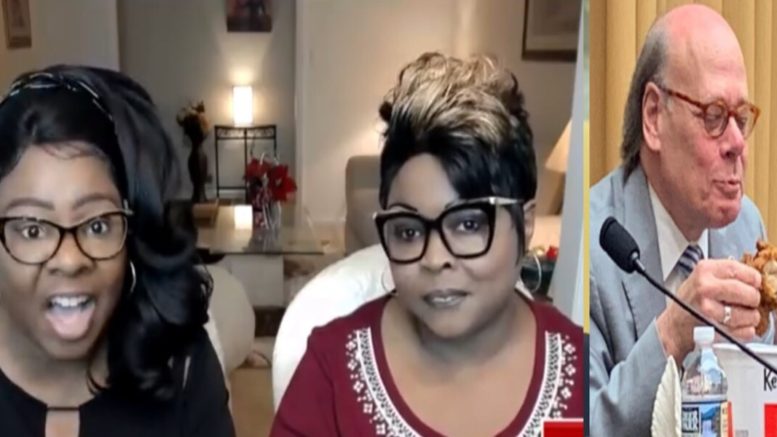 Democrats melted down after Attorney General William Barr declined to show for the Thursday House Judiciary Committee hearing about the released Mueller report.

Diamond and Silk, however, reacted to the grandstanding that was displayed by Democrats, namely the House Clown, Rep. Steve Cohen (D-TN).

Rep. Cohen brought what appeared to be a rubber chicken and a bucket of KFC fried chicken to the House Judiciary Committee hearing Thursday after Attorney General William Barr declined to appear for their circus show.

This comes after Rep. Jerry Nadler (D-NY) insisted on voting Wednesday for “staff” to ask questions of the Attorney General, but Barr wasn’t interested in the Chairman’s shenanigans.

Cohen sat in his seat in the committee room Thursday and ate fried chicken, along with displaying a chicken prop over the seat Barr would have sat in if he had appeared before the committee. (Continued Below)

After Cohen mocked the Attorney General, Diamond and Silk weighed in calling his stunt “racially insensitive.”

“You know, he’s racially insensitive, is what I think. Could you image a Republican doing that to a Democrat? Just think about that for a moment.” Diamond said.

She explained why Barr is experiencing all the slander: “The Democrats are afraid. They’re getting caught up in the shenanigans, who orchestrated and masterminded this Russia witch hunt hoax. And once that comes out, I mean, it’s gonna blow up in their faces. So what they are gonna do is try to smear him. They smear him because they fear him. They fear him because he is going to get to the truth.” (Continued Below)

Asked about the Democrats’ continuous calls for impeachment, Diamond and Silk said that the President won fair and square and should not be impeached.

“We want to know what happened, when it happened, how did happen, and everybody needs to be brought to the table and prosecuted to the fullest extent of the law!” She expressed.

Diamond and Silk also want to know why was the Trump campaign spied and who orchestrated it? “Who gave the okay to do that? Why did you do that? That’s wrong!” Diamond proclaimed.

Silk said she knew back in 2015 that something was not right and that it’s time for Democrats to stop “all of the investigations” and instead, “legislate and cooperate with the President.” (Video Below)

(Related: Diamond & Silk Decimate Dems, Socialism, & More In Fiery Address At CPAC: ‘They Only Smear Who They Fear!)