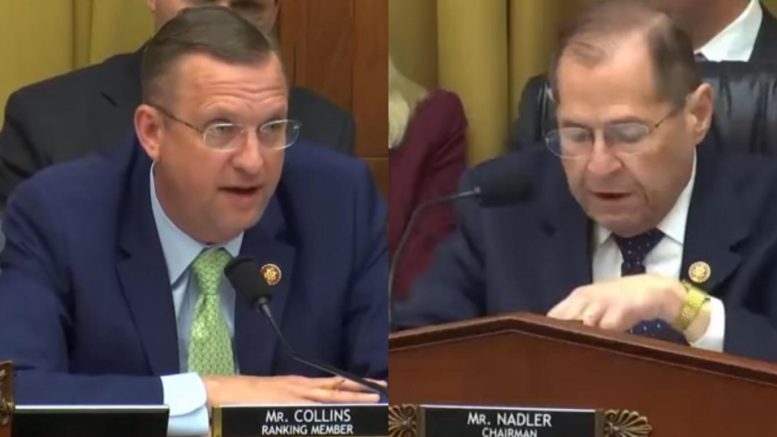 The committee, led by Chairman Jerry Nadler (D-NY), gave the Attorney General a deadline of 9 a.m. Monday to turn in the full report with no redactions which is against the law. Further, Republicans believe the sensitive material could be leaked.

Rep. Nadler scheduled the congressional contempt vote on Wednesday. All Democrats that were present voted to hold William Barr in contempt of Congress in the contempt resolution. The measure will move to the full House for a vote later this month.

“The Attorney General has been transparent and accommodating throughout this process, including by releasing the no-collusion, no-conspiracy, no-obstruction Mueller Report to the public and offering to testify before the Committee. These attempts to work with the Committee have been flatly rejected. They didn’t like the results of the report, and now they want a redo,” press secretary Sarah Sanders said in a statement on Wednesday.

“Faced with Chairman Nadler’s blatant abuse of power, and at the Attorney General’s request, the President has no other option than to make a protective assertion of executive privilege,” she continued. (Continued Below)

“They know the Justice Department is working to negotiate even as they pursue contempt charges, making their move today illogical and disingenuous. Democrats have launched a proxy war smearing the attorney general when their anger actually lies with the president and the special counsel, who found neither conspiracy nor obstruction,” Collins added. (Continued Below)

The Georgia Congressman believes that Democrats are smearing the Attorney General for two reasons: “Democrats are angry that the special counsel’s report did not produce the material or conclusions that they expected to pave their path to impeaching the president,” he said on Wednesday during his opening.

“I feel compelled to remind everyone that the report found, despite offers to do so, no one from the Trump campaign knowingly conspired with the Russian government. And you can’t help but notice the phrase ‘Russian collusion’ has vanished from the Democratic talking points and left a void in the narrative,” Collins pointed out. “As a result, they are angry.”

He went on to list the second reason and said, “Democrats are afraid of what the Attorney General will find when he completes his ongoing review of FISA abuses of the Justice Department, including how the Russian investigation began. Multiple news reports have suggested those conclusions could be explosive, could end careers and could even lead to criminal prosecution. Rather than face that, the Democrats have resolved to neutralize Bill Barr by attacking him and the office, his integrity, and his career.”

“This is the first step. What a cynical, mean spirited, counterproductive, irresponsible step it is!” Collins declared. “The Democrats have no plans, no purpose, and no viable legislative agenda beyond attacking this administration.” (Video Below)

The Republican ranking member concluded by saying, “Finally, Mr. Chairman, I’d like to quote a fellow member of Congress. As a member of Congress, I treat assertions of executive privilege very seriously and I believe they should be used only sparingly.”

He added, “In this case, it seems clear the administration was forced into a position by the committee’s insistence on pushing forward with contempt, despite the attorney general’s good faith offer. Mr. Chairman, it did not have to be this way. We could have postponed today’s vote and accepted the AG’s offer, instead, by not honoring the Constitution’s charge to seek accommodations when possible, the prestige of this committee has been diminished. As I result, that should concern us all. I quote Elijah Cummings.”