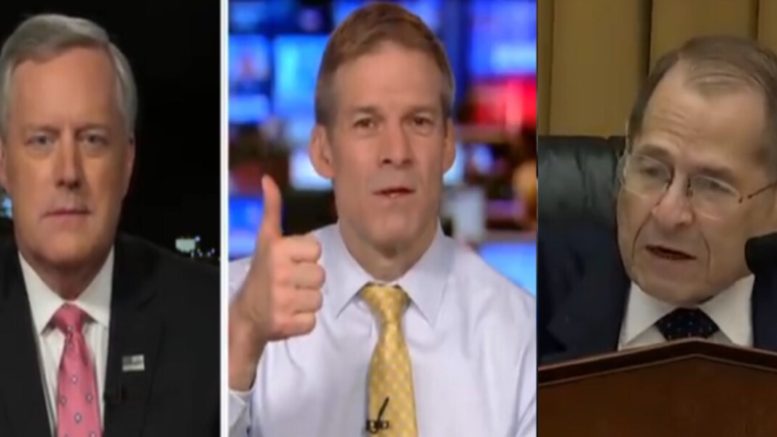 Now that the Russian collusion hoax is dead and Democrats’ ship of lies is sinking, more of the truth is unraveling, and the swamp rats are being exposed for their effort to frame and overthrow a duly elected President.

Last week, President Trump sat down in an exclusive interview with Fox News’ chief intelligence correspondent Catherine Herridge, where he told her he expected that key FBI documents that may shed light on the origins of the bureau’s probe into his campaign could be declassified and released within a matter of weeks, or months at the latest.

Trump told Sean Hannity during an interview last month that he will, in fact, declassify the FISA applications, the 302s, and the Gang of Eight notebook. “Yes, everything is going to be declassified and more, much more,” the President revealed.

(Related: Trump Gives An Emphatic Response When Asked What He Will Declassify: ‘Everything (And More) Is Going To Be Declassified’)

Trump said it was an attempted coup to try and take him out, but a lot of information is coming out. “A lot of people are very nervous about what is going on,” he suggested. (Continued Below)

Further, the Attorney General has vowed to review the conduct of the FBI’s original Russia probe and believes that “spying” on the Trump campaign did occur.

Rep. Mark Meadows said in the coming days we will see a lot of things unravel. “As it unravels, part of why you’re seeing Jerry Nadler and others go crazy is because they know that the truth is coming out.” [Emphasized]

Meadows was referring to the Democratic-controlled House Judiciary Committee who voted Wednesday, 24 Dems to 16 Republicans, to hold Attorney General William Barr in contempt of Congress for not giving the committee special counsel Robert Mueller’s full, unredacted report. (Continued Below)

Meadows continued, “They won’t even look at the documents because they don’t want to know the truth, and Director Comey, he has his day of reckoning too. [Comey] says [the FBI] investigate[s], we all know that they criminally leak as well. It’s time for accountability.”

Jordan said that Comey admitted up until the day that he was fired that the FBI had “nothing”, no evidence of any type of collusion. “Obviously in the Mueller report, it demonstrated that as well,” Jordan said.

During Wednesday’s Judiciary Committee meeting, Jordan explained that Barr said 4 important things during his testimony: First, there was a failure of leadership at the upper echelon of the FBI. Second, the Attorney General said that spying did occur. Third, Barr said that there is a basis for his concern about the spying that took place. Forth, Jordan described as the most interesting, “Barr said, in his judgment, that he thinks there may have been unauthorized surveillance and political surveillance.”

The Ohio Congressman also said Wednesday, “On October 21, 2016, the FBI used one party’s opposition research document as the basis to go to a secret court to get a warrant to spy on the other party’s campaign. That happened. Democratic National Committee, the Clinton campaign, paid Perkin Coie law firm, who hired Fusion GPS, who then hired a foreigner, Christopher Steele who talked to Russians and put together what? This salacious, unverified document that became the basis to get a warrant to spy on the Trump campaign.”

In a nutshell, the left wing media and Democrats are now a mission to smear the Attorney General and are using coordinated talking points. They are going to attack Barr and try to destroy him before he uncovers the truth for the American people. They have called him a liar and more to gaslight their politically motivated agenda in stopping him and regain their power in 2020.

When Barr uncovers the truth, Democrats are hoping that their base won’t “trust” Barr’s findings, hence why they are calling him a liar now. The letter that was leaked before his testimony was designed to do just that.

More tricks are coming as Democrats are trying to divide the country and keep voters. They can’t run on substance, because they don’t have anything to offer, except fear, harassment, identity politics, slander, and attacks. Drain the swamp.

(Related: DiGenova Reveals A ‘Bombshell’ Comey Report That Is Due Out Within Weeks: ‘There Will Be Criminal Referrals In It’)