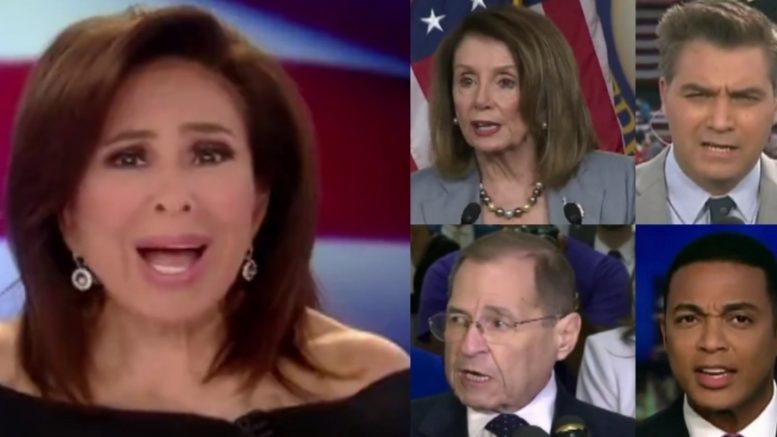 On Saturday evening, Judge Jeanine Pirro sounded off on Democrats latest claim that America is now facing a constitutional crisis.

This came after holding Attorney General William Barr in contempt for not handing over the entire, unredacted Mueller Report as was requested by House Judiciary Chairman Jerry Nadler.

Judge Jeanine played clips of both politicians and mainstream news pundits stating that there is a constitutional crisis, and she shut tthem all down in classic fashion.

She pointed out that the only constitutional crisis came from that of the phony Russia probe that was initiated by former FBI Director James Comey. Before getting into that, however, Pirro mentioned that 98% of the Mueller report was handed over by Barr to Congress. And he really didn’t have to hand over any of it.

She said, “I’ve got news for you, bozos. You weren’t even entitled to any of it. The report was written for the Attorney General by the Special Counsel.”

“The Attorney General decided to issue a four-page conclusion,” Judge Jeanine continued. “And offered skeptical Democrats a SCIF, a secure facility, to see the full report. Not one Democrat wanted to see it.” Video Below

As a result, Pirro said that Barr found himself in the position of either violating federal law by releasing grand jury testimony or giving in to the demands of “the loony left.” Both of which, he decided not to do.

And now Barr finds himself held in contempt of Congress, which Judge Jeanine said was primarily done because Democrats want to “muddy him up” before he starts indicting people from their party. This way, they can claim his moves are political.

She closed out her segment by pleading for Americans to gear up for 2020, and to take action if you don’t like the games that are being played. She declared, “We need a House of Representatives that represents the people of this great nation.” Video Below

We need a House of Representatives that represents the people in this great nation. Not people who want to remake America and maintain their own power. God help us. God help us if we elect these same people and they stay in control of our country. #OpeningStatement pic.twitter.com/yuht8kS681