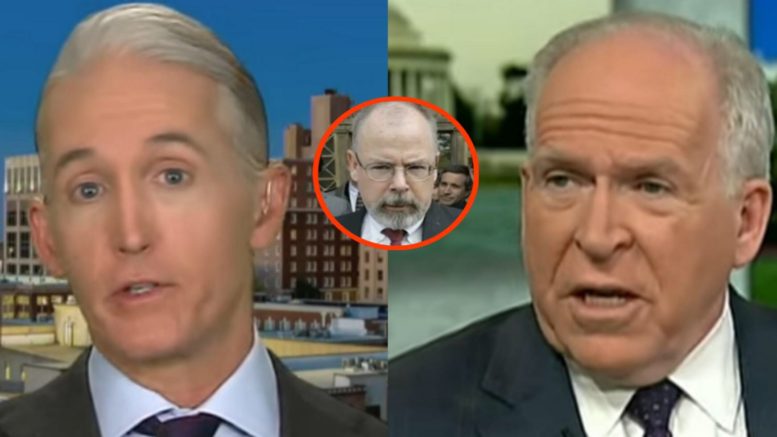 Attorney General William Barr has officially made good on his promise and appointed a U.S. attorney to investigate the origins of the Russia investigation to determine if the FBI’s “spying” on the Trump campaign in 2016 was adequately predicated. Barr appointed John Durham, the U.S. attorney in Connecticut, to conduct the inquiry.

After the news broke, former South Carolina Congressman, Trey Gowdy interviewed with host Sean Hannity where he weighed in and suggested,” Whoever is investigating this, tell them to look for emails between Comey and Brennan in December 2016.”

Trey Gowdy joined host Martha MacCallum on Fox News Tuesday for a follow up on his response but also, he disclosed more hints at where to gather information.

Responding to the emails, Gowdy said Sen. Lindsey Graham (R-SC) has exercised the lack of corroboration of the Steele dossier that was used in court filings.

It was recently revealed through a Freedom of Information Act request that Steele met with then-State Department official Kathleen Kavalec ten days prior to the issuance of the initial Carter Page FISA warrant and told her that he was “keen to see this information [the dossier] come to light prior to November 8,”  the date of the 2016 presidential election. (Continued Below)

“So the question then becomes was it unverified, uncorroborated when you used it? And then, when did you begin to corroborate it? What I’m telling Mr. Durham or whoever is going to look into this, I think you will see ‘late’ in 2016, well after it had been used. It was still unverified, and the people responsible for it were referring to it as unverified,” Gowdy explained.

Then he pointed out that “one of the other demanded [the dossier] be used in the intelligence assessment, which then leaked, which then prompted the discussion you and I are having now publicly.”

Martha MacCallum said that John Brennan is pushing back on the allegations of the dossier. “Clearly he knows now there is another investigation into it. He heard Attorney General William Barr say ‘I’m not just interested in the FBI, I’m also interested in the other agencies.’ Which of course, would point offensively at John Brennan who was the head of the CIA at the time,” she noted. (Continued Below)

“So the statement tonight by Catherine Herridge says that John Brennan says that he and James Clapper did not want to include the dossier– that it was James Comey who insisted on using the dossier as they were doing investigations, and also the intelligence report that was presented to President Trump,” MacCallum said.

Gowdy explained that “it’s one more place for Mr. Durham to start– who insisted that the dossier or the unverified material from Christopher Steele be included.” He added, “But sometimes when you have two people… sometimes when people are blaming each other, they are both right. I think it’s interesting, Brennan and Comey right now, the only thing they seem to share is a hatred for Donald Trump. It’s gonna be interesting if they begin to turn on one another.”

Then he pointed out that he has seen the document and declared, “Comey has a better argument than Brennan, based on what I’ve seen.”

MacCallum said that Brennan was very defensive against the need for another investigation and he said during his interview: “I think they’re just trying to demonstrate that there was problems with what the Obama administration did as to pursue this investigation. As you point out, [the dossier] went through a rigorous due process within the Department of Justice and FBI. It was approved by the FISA court. It went through all of those steps.”

Gowdy fired back and leveled him, “The judges are not investigators. They’re only as good as the information presented to them, which is why you make the applicant swear out. You swear out an application. When the FBI is telling you that this information has been verified, and when they’re telling you it’s been investigated and corroborated, the judge has to rely on that. They don’t get to go conduct their own separate investigations.” (Continued Below)

Gowdy added, “Which is why it’s really important to ask the FBI agents, and Comey ‘if you verified this information before it was used’, tell us how!”

“I have seen the spreadsheet. I have seen each factual assertion listed in that dossier, and then, I’ve seen the FBI’s justification. And when you’re citing newspaper articles as corroboration for a factual assertion that you have made, you don’t need an FBI agent to go do a google search. You can blame it on the FISA court if you want to, and I hope Brennan is smart enough,” he suggested.

“Judges don’t investigate! They have to rely on the honest word of the people presenting it to them, and if that honest word is missing, then the judge is going to make the wrong decision.” Gowdy concluded.

It worth noting that Brennan is both scared and mad that Sen. Graham is investigating as he tweeted on Tuesday, “Senator Graham & his ilk bear responsibility for damage being done to our national interests—at home & abroad—by acquiescing to Mr. Trump’s incompetence, corruption, & malevolence. Who will shun political expedience & do what is right? ‘Who among you is wise and understanding?’”

Senator Graham & his ilk bear responsibility for damage being done to our national interests—at home & abroad—by acquiescing to Mr. Trump’s incompetence, corruption, & malevolence. Who will shun political expedience & do what is right? “Who among you is wise and understanding?”