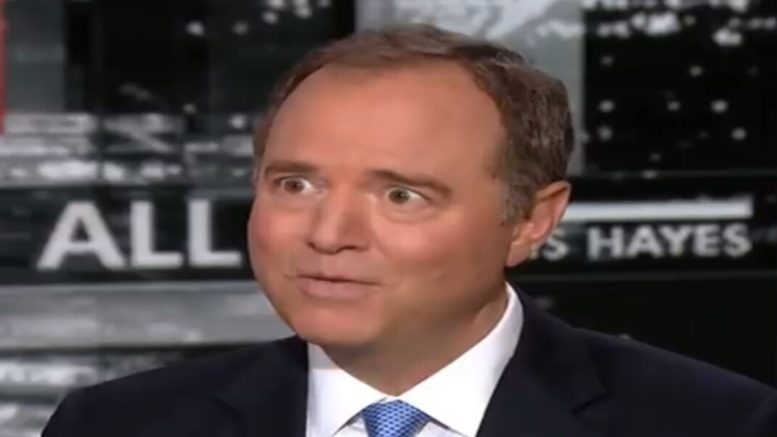 Schiff, who has peddled lies for over two years about “Russian collusion” within the Trump campaign, is seemingly holding strong to the narrative, despite the Mueller report declaring otherwise. On Tuesday, a senior committee official said Schiff is prepared to issue a subpoena for “obstruction claims” against Trump’s Family and lawyers.

According to The Washington Times, the House Intelligence Committee is investigating whether lawyers tied to President Trump and his family helped obstruct the panel’s inquiry into Russian election interference by shaping false testimony, a series of previously undisclosed letters from its chairman show.

The line of inquiry stems from claims made by the president’s former personal lawyer and fixer, Michael D. Cohen, who told Congress earlier this year that the lawyers in question helped edit false testimony that he provided to Congress in 2017 about a Trump Tower project in Moscow. Mr. Cohen said they also dangled a potential pardon to try to ensure his loyalty, reported the Times.

In recent weeks, the committee sent lengthy document requests to four lawyers — Jay Sekulow, who represents the president; Alan S. Futerfas, who represents Donald Trump Jr.; Alan Garten, the top lawyer at the Trump Organization; and Abbe D. Lowell, who represents Ivanka Trump. The lawyers all took part in a joint defense agreement by the president’s allies to coordinate responses to inquiries by Congress and the Justice Department, per The Times.

In letters “obtained” by the Times, Schiff wrote to lawyers representing the four men that read in part, “Among other things, it appears that your clients may have reviewed, shaped and edited the false statement that Cohen submitted to the committee, including causing the omission of material facts. In addition, certain of your clients may have engaged in discussions about potential pardons in an effort to deter one or more witnesses from cooperating with authorized investigations.” (Continued Below)

Tom Fitton said that Adam Schiff “should not be Chair of the Intelligence Committee”.

“We asked the ethics committee to investigate his improper discloser of classified information. And then he had these illicit contacts with Glenn Simpson and other anti-Trump witnesses. Someone with that level of unethical malpractice should not be trusted with classified information,” Fitton stated.

“And him threatening to jail his political opponents shows you where his head is at. [He’s] one of the top offenders of President Trump. He’s obviously working with Fusion GPS,” Fitton said. (Continued Below)

Then, Fitton fired off and declared, “He’s been on the scam! And I don’t say this lightly Lou, because he’s one of these politicians that have lied repeatedly about Russia and Donald Trump. He has been a liar in chief when it comes to targeting President Trump and he needs to be held accountable for it!”

#DTS– @TomFitton: Schiff shouldn’t be the chair of @HouseIntel. Someone with that level of ethical malpractice shouldn’t be trusted with classified info. He is the top offender of illicitly targeting @POTUS. He has lied repeatedly about Russia & @RealDonaldTrump. #MAGA #Dobbs pic.twitter.com/l0WF8JwpGh

Call your congressmen and let them know what you think about the Ethics Committee cover-up of Schiff misconduct. 202-225-3121. https://t.co/YUt7mcg2UI

(Related: Gowdy Unveils The Chief Motive Behind Nadler & Schiff’s Trump Probe: ‘This Is All About 2020’)