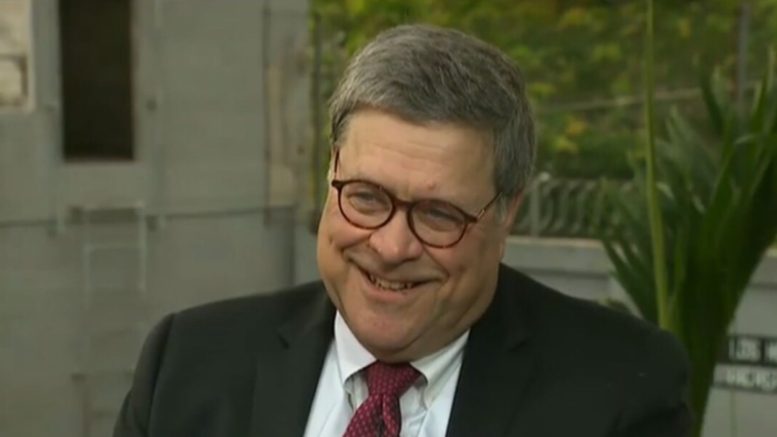 This comes as Barr appointed John Durham, the U.S. attorney in Connecticut, to help investigate the origins of the Russia investigation to determine if the FBI’s “spying” on the Trump campaign in 2016 was adequately predicated.

Bill Hemmer explained that Attorney General William Barr is in El Salvador where his trip is focused on immigration, MS-13, and criminal gangs.

Hemmer said that he and Barr sat down for 20 minutes during their interview at a prison, 30 miles west of the capital city of San Salvidor.

Barr fired back at Democrats who have criticized him over his handling of Special Counsel Robert Mueller’s report — calling Speaker Nancy Pelosi’s charge that he lied to Congress “laughable” and dismissing an attempt to hold him in contempt of Congress.

“That’s part of the usual … political circus that’s being played out. It doesn’t surprise me,” he said. (Continued Below)

The Attorney General provided new details about the recently announced probe into the origins of the Russia investigation, defending his decision to pursue it and stressing that many of the answers he’s gotten so far have been “inadequate.”

“The first step is to find out exactly what happened, and we’re trying to get our arms around that, getting all the relevant information from the various agencies and starting to talk to some of the people that have information,” Barr said. “The thing that’s interesting about this, is that it was handled at a very senior level of these departments. It wasn’t handled in the ordinary way that investigations or counterintelligence activities are conducted. It was sort of an ad-hoc small group, and most of these people are no longer with the FBI or the CIA or the other agencies involved.”

Hemmer said this appears to run deep. Asked why it’s so hard to figure out, Barr argued there’s much yet to learn. “There [are] two things here, no ones really looked at it. I think there’s a misconception out there that we know a lot about what happened,” Barr said. (Continued Below)

“The fact of the matter is Bob Mueller did not look at the government’s activities. He was looking at whether or not the Trump campaign had conspired with the Russians. But he was not going back and looking at the counterintelligence program. And we have a number of investigations underway that touch upon it — the main one being the office of inspector general that’s looking at the FISA warrants,” The Attorney General said. “As far as I’m aware, no one’s really looked across the whole waterfront.”

Barr said he couldn’t name a date when Mueller didn’t know when there was no collusion but added that he was surprised that the Special Counsel didn’t come back with an obstruction charge. “The function of a prosecutor is to make a call, one way or the other,” he noted.

Barr also responded to Pelosi’s recent claims that he lied under oath.

“It’s a laughable charge and I think it’s largely being made to try to discredit me partly because they may be concerned about the outcome of a review of what happened during the election,” Barr emphasized. “They may be trying to undermine my credibility, but obviously you can look at the face of my testimony and see on its face that there was nothing inaccurate about it.”

Barr believes Democrats are annoyed that they weren’t able to spin the narrative of the Mueller report. “The fundamental findings were out there for everybody to see, and they were not in a position to spin.” (Video Below)

Asked when he took the job if he knew Democrats would make him the target, Barr said, “Yes. I thought I was in a position where this kind of criticism wouldn’t really bother me very much.” He added of the charge of contempt from the House committee, “It’s part of the usual game, you know, the political circus that’s being played out. It doesn’t surprise me. I don’t feel threatened.”

(Related: Catherine Herridge Exposes Fmr. Obama Officials Turning On Each Other Over The Dossier)