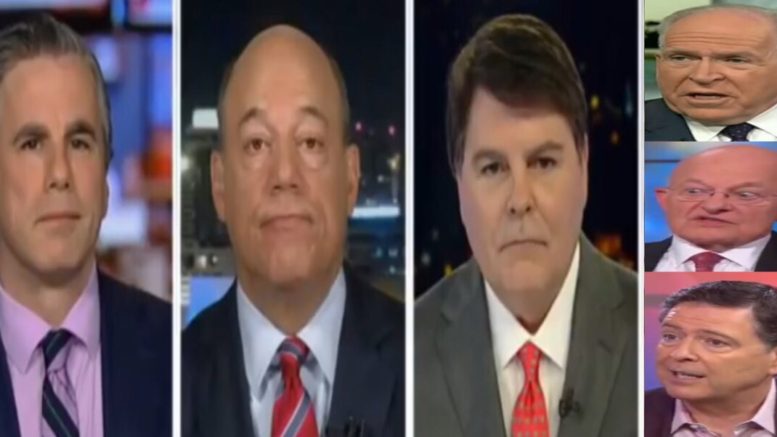 The swamp is deep, but the truth is going to surface with now Attorney General William Barr leading the charge. There’s a new sheriff in town.

Tom Fitton began by discussing new emails that Judicial Watch uncovered from the Justice Department through a March 2018 Freedom of Information Act lawsuit. Judicial Watch released an email Thursday that reveals Nellie Ohr, who worked for Fusion GPS and was hired to dig up dirt on Trump, and is also the wife of former Associate Deputy Attorney General Bruce Ohr, informed him that she was deleting emails sent from Bruce Ohr’s DOJ email account.

The full email exchange is between Bruce Ohr, Lisa Holtyn, Nellie Ohr, and Stefan Bress, a first secretary at the German Embassy, and is part of 339 pages of heavily redacted records from the U.S. Department of Justice, according to JW.

“So it looks like you have Russia related emails being deleted at the request of Bruce Ohr, Justice Department material, and certainly, it could be possibly relevant to the Russia-gate hoax– targeting President Trump and the investigation generally,” The Judicial Watch President explained. (Continued Below)

The conversation turned to Gregg Jarrett where he weighed on on the Deep State actors starting to turn on each other along with a “blackmail operation” in the Obama administration.

“They’re talking about blackmailing because they were actually engaged in blackmailing. They needed to take their ‘holy grail’, which was the dossier, and they needed to slip it into the private version of the intelligence community report–so then, they could brief the President-elect Trump. That was a pretext to then leak it to the media and they could then publish the contents of the dossier,” Jarrett said.

He added, “Now you have these nefarious characters, [James] Comey, [John] Brennan, and [James] Clapper who are now pointing the fingers of blame on each other– the circular firing squad. You’ve got James Baker, who is now trying to rationalize the corrupt acts that the documents balie.” (Continued Below)

Ari Fleischer weighed on the corruption that took place in the Obama Administration letting Hillary off the hook and covering for her.

“Look at it this way: people criticize President Trump for breaking the norm of Washington, D.C. Once you get beyond the smooth words of Barrack Obama, what you really had was the worst transition in American history where administration, the outgoing one, was so shocked about who won, that they did everything in their power during the transition to undermine him– including the secret state powers of the government to undermine him, leak information, unmask officials, and leak that information, not to mention released classified phone calls to foreign leaders. All of this took place,” Fleischer said.

“Put yourself in the President’s shoes,” Fleischer urged. “You don’t know Clapper, Brennan, Comey. The three come in to give you a briefing as President-elect about the governments most cherished secrets. In a choreographed moment, two of those three left, leaving only Comey behind– for Comey to share something so sacred with the President and it turns out to be the Steele dossier, which the President himself would know if it were true or wasn’t true.

“So, what is [Trump] to conclude? He knows it’s not true. He concludes that James Comey is trying to hold something over him as the FBI Director to the incoming President,” Fleischer added. (Continued Below)

Hannity pointed out that three months before that meeting took place, Comey signed a FISA warrant claiming that the dossier was true.

Fitton noted that Barrack Obama needs to come clean about what when on, what he knew about the dossier, and why he authorized the FBI Director to go in with the “garbage dossier” that they all knew was salacious and unverified.

Jarrett said that William Barr has been around the block a long time and can smell a coverup a mile away. “You heard him tell Bill Hemmer that he was getting incomplete answers that didn’t make sense– that means people are lying, blaming others, and covering up the truth.”

Fleischer concluded with the last word on the segment and said, “Thank goodness we have a Justice Department that’s going to do what should’ve been done and look into the origins of this and figure out if [anything] wrong was done. I have faith in Bill Barr, he’s an honest man. (Video Below)