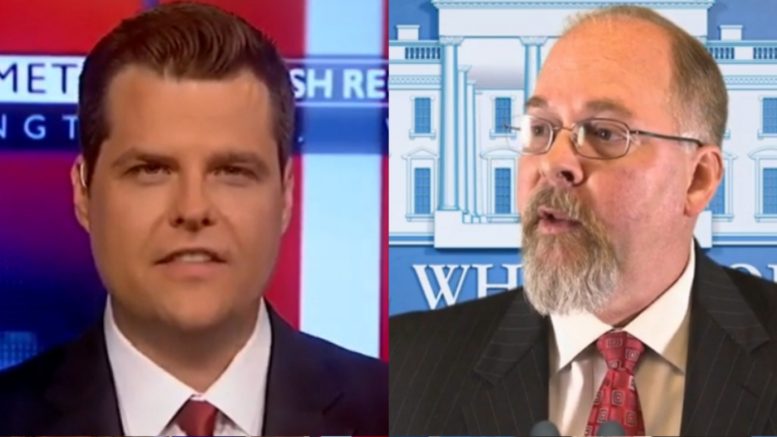 Republican Congressman Matt Gaetz joined Trish Regan of Fox News to give his reaction on Attorney General William Barr tapping Connecticut attorney John Durham to look into the origins of the Russia probe.

Gaetz pointed out that there is not only one scandal he is concerned with Durham uncovering, but that he believes there are “multiple scandals.”

Gaetz advises Durham to focus on three particular areas during his investigation into the Russia probe’s genesis, and he laid them out.

Gaetz said, “First, the leaks. You’ll recall that under James Comey and Andrew McCabe, the FBI wasn’t investigating as their principle activity. They were trying to shape public opinion by having the media report certain things that were negative about Donald Trump or positive about their agency.”

He said the second area involves “the frauds that were committed on the secret court that then impaired the constitutional rights of American citizens.”

Gaetz said those frauds included not disclosing that British spy, Christopher Steele, was the one who was “curating” Russian lies delegitimize Donald Trump and his campaign. Video Below

Related Article: Gowdy Advises Where To ‘Look’ After Barr Assigns Durham To Investigate: ‘Look For Emails Between Comey & Brennan in Dec 2016’

Gaetz concluded, “It seems to suggest that people like Comey and Brennan and Clapper were more involved with tring to create this narrative, rather than conduct the investigation. Video Below