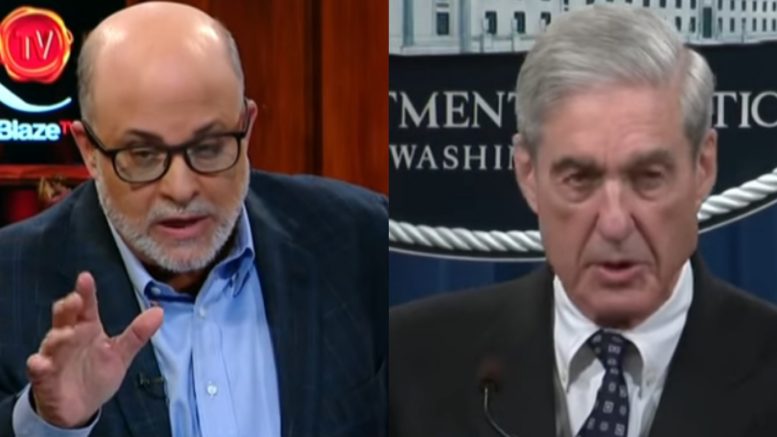 On Wednesday, Mark Levin joined Sean Hannity to give his reaction to Robert Mueller’s briefing made to the press.

Levin was troubled by explosive remarks given by Mueller for many reasons, but primarily because he feels the whole thing was “orchestrated.”

Levin thinks that as part of a deal worked out with Jerry Nadler to not testify, Mueller opted to give Democrats the “information” and “propaganda” needed to help propel forward their narrative against President Trump.

He then pointed out how Mueller never stated to the press or in his report that he had probable cause on President Trump, yet insinuated that Trump committed a crime.

Levin said that if Mueller really did think that Trump committed obstruction, why leave it up to Attorney General Barr to decide and not wait until 2020 to see if the President gets re-elected, and if he doesn’t, charge him with obstruction of justice then?

“The answer is there were no crimes. He had no case,” Levin continued. There was no probable cause.” Video Below

Related Article: Maxine Waters Goes Into A Stage Five Impeachment Frenzy Before & After Mueller’s Briefing: ‘Throw Him Out Of Office’

“This whole damn thing has been a setup against this President,” Levin concluded. “Republicans, you drag this man in front of the House Judiciary Committee, if you can. You demand it every time and you question him! Lindsey Graham, you’re chairman of the Senate Judiciary Committee. You get him in front of your committee, and you question him! You give Mueller the Trump treatment and let’s see how that ends.” Video Below

Related: O’Reilly Explodes On Mueller’s ‘Unfair’ Press Briefing: ‘He Wants The Swamp To Like Him’