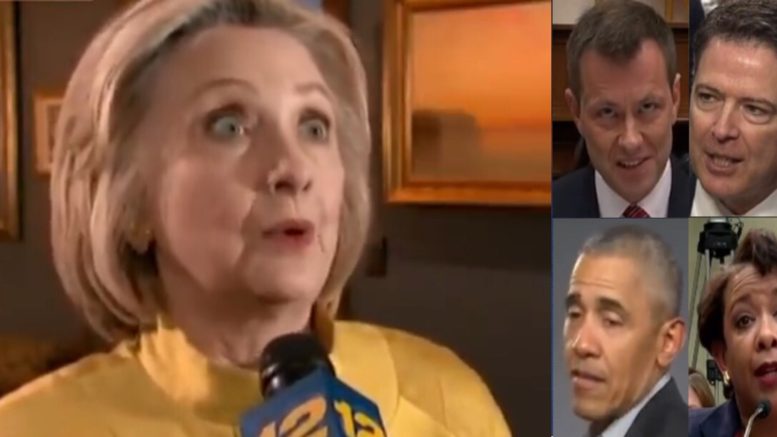 Kendall and the FBI’s top lawyer discussed specifically quickly obtaining the “302” report of the FBI/DOJ interview of Mrs. Clinton.

In a new press release from Judicial Watch on Monday, Judicial Watch announced that they received 218 pages of emails that were obtained in a Freedom of Information Act (FOIA) lawsuit filed after the Justice Department failed to respond to a December 4, 2017, FOIA request.

The emails also show the FBI failed to document at least four interviews of witnesses in the Clinton email investigation, reported Judicial Watch.

One email reveals that on August 17, 2016, Kendall sent a FOIA/Privacy Act request on “behalf of former Secretary of State Hillary Rodham Clinton” to the FBI’s top lawyer with a request for “expeditious processing.” Baker passes this request to Bowdich, Steinbach, Herring, Page, Anderson: In my view, we need to move as quickly as possible on this, but pursuant to David’s oral request last night, we should focus first on Secretary Clinton’s 302…. Is the end of this week out of the question for her 302? Per JW. (Continued Below)

Tom Fitton said that Lisa Page “figured out” that there were at least four 302’s missing of interviews. “That tells you one of two things: either the interviews, they didn’t want to see the light of day, or they didn’t really care enough about the investigation to bother writing stuff down because they knew it was wired. Either way, it highlights the sham nature of the investigation,” he said.

He further noted that James Baker had a discussion with Hillary Clinton’s personal lawyer, David Kendall, advising him on how to get the 302 interviews and filed it the next day “on behalf of Hillary Clinton.”

“Hillary Clinton gets that 302 within 2 weeks. I tell you, that’s a miracle! We’ve been doing this for 20 years, ‘Freedom of Information Act’ work… The idea that a General Counsel of the FBI would help a FIOA applicant get this material, especially sensitive material, is extraordinary. And it shows you that the FBI, at the same time, was helping Hillary Clinton,” Fitton added. (Continued Below)

Sara Carter explained, “This is absolutely not normal procedure. Everything that’s been uncovered, time after time, with regard to actual documented facts.”

She went on to say, “This isn’t just hyperbole, we’re not just making this up. This is based on actual documentation from the FBI in their own words. You could see how far they went for Clinton’s attorney’s to expedite the 302’s, then not even have four of those 302’s.”

Carter mentioned Cheryl Mills, who was a witness that sat in on the interview, and said that the FBI didn’t record that either.

She also noted that Peter Stzok is going to play an “important role” because he was involved in the investigation. “More and more evidence comes out every day about his involvement. I think when people see Michael Horowitz’s report and find out what happened there, there will be explosive information– an avalanche of information that’s going to come out.” (Continued Below)

“These incredible documents show the leadership of the FBI rushed to give Hillary Clinton her FBI interview report shortly before the election,” said Fitton. “And the documents also show the FBI failed to timely document interviews in the Clinton email ‘matter’ – further confirming the whole investigation was a joke. AG Barr can’t reopen the Clinton email investigation soon enough,” per JW.

The documents were obtained in a Freedom of Information Act (FOIA) lawsuit filed in a FOIA request (Judicial Watch v. U.S. Department of Justice (No. 1:18-cv-00154)) for: