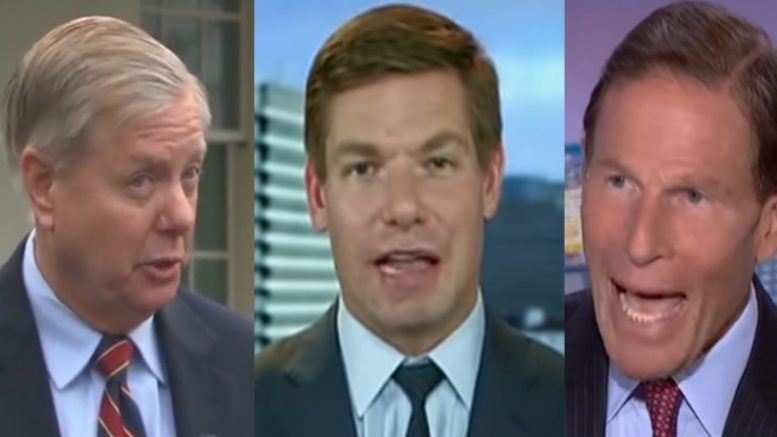 Democrat Representative and Presidential hopeful, Eric Swalwell, is trying to put his foot down in his reaction to a recent clip featuring President Trump discussing “foreign oppo” research.

Trump triggered forces of the left, including a few of his Republican colleagues, after a clip circulated of him suggesting that he hypothetically may not give foreign opposition research to the FBI.

The President later clarified his statement, on Friday, saying the media blew it out of proportion and said he actually would hand over such information to the FBI if he felt necessary.

In an interview with MSNBC, Rep. Swalwell declared for the first time that he thinks Trump must be impeached. He also said that he joined forces with Senator Richard Blumenthal to pass legislation that would require an individual to tell the FBI if they received information from a foreign agent.

In addition, Swalwell revealed his hopes that Senator Lindsey Graham would sign on to the cause with both he and Blumenthal.

Swalwell said , “Well, I hope Senator Graham will sign on to my legislation that Richard Blumenthal and I have.” Video Below

“It says that if you receive information from an agent of a foreign power, you have to tell the FBI,” Swalwell said.

He concluded, “That’s always been the honor code in our country. Now we need to make it a part of the rule of law. And I would love for this to now be bipartisan legislation.”

In the meantime, Swalwell and many others on the left still have failed to condemn Hillary Clinton and the DNC for funding foreign opposition research on Trump that authored by former British spy, Christopher Steele. Video Below

I hope that Senator Graham will sign onto my Duty to Report Act, requiring that if a foreign power offers you "dirt" on an electoral opponent, you must tell the FBI. pic.twitter.com/WnXwihuvnk

In ending, we leave you with a clip of Senator Graham wishing President Trump a Happy Birthday.