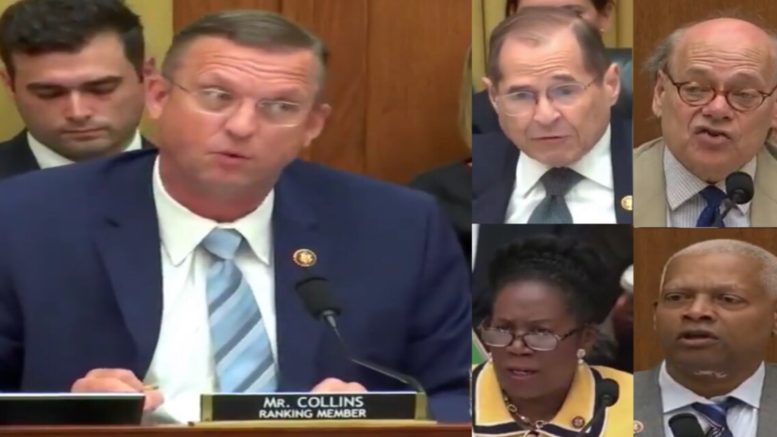 The ranking member of the committee, Congressman Doug Collins (R-GA), blasted Democrats in his opening for trying to re-do the Mueller investigation, yet again.

Rep. Collins began his opening by explaining that the Special Counsel’s investigation found that no Americans and no one on the Trump campaign conspired or coordinated with the Russians during the 2016 presidential election.

“That was great news for American and I thought it would actually be great news for all Americans, but to my surprise, and really, not really surprised, it wasn’t. Democrats are not only disappointed, they’re angry– angry the President was not a Russian asset it seems. Imagine disliking a President so much that you wish he were a foreign agent,” Collins said. “That’s where the other party is today.”

The Georgia Congressman suggested that Democrats are trying to revive their Russia conspiracy theory, despite the Special Counsel’s findings. “They spent two years calling the Mueller team the best of the best, but since they didn’t like the outcome, Democrats now have to play prosecutor and ‘re-do’ the Mueller investigation,” he said.

Collins noted that Democrats launched their “do-over” when House Judiciary Chairman Jerry Nadler (D-NY) sent 81 document requests to individuals connected to the President. “We’ll call that the ’81 investigation’, as I call it. It was quickly abandoned in favor of ‘plan B.’ Plan B was Democrats manufactured a fight with the Attorney General. They issued a subpoena with the Attorney General to violate the law by producing Grand Jury materials to Congress. Unsurprisingly, the Attorney General declined to break the law,” Collins stated. (Continued Below)

“Did the Chairman learn from this experience? No. The Democrats overplayed their hand again with Plan C when they subpoenaed testimony and documents from former White House counsel, Don McGhan,” Collins continued adding that every President since the 1970’s, including Clinton and Obama, claimed immunity over congressional testimony from close Presidential advisors.

He went on to say that when plans A-C failed to accomplish anything of substance, Democrats decided to go in for the “heavy artillery for plan D.”

“What was plan D? Was it Mueller himself? No, that would’ve made too much sense. Was it was a pivot to focus on the actual findings of wrongdoing in the Mueller report related to foreign election interference? No, that would’ve been productive. Instead, plan D was John Dean. Yes, the convicted felon from the Watergate scandal who spent 40 years telling everyone who will pay him [attention] that anything that happens now is worse than Watergate,” Collins continued. (Continued Below)

The ranking member pointed out that the Democrats’ John Dean hearing was a flop and mentioned left-leaning “news sources” who even agreed.

“Perhaps the best thing that could be said about the hearing was that no one repeated a stunt quite like the one that we saw from Rep. Cohen pull last month in that same room from when he ate from a bucket of chicken,” he said citing The Washington Post.

Collins further explained that the fact the American public would be energized by John Dean, who has done nothing relevant since the 70’s, shows how desperate and out of touch they became. He added that one Democrat member was disappointed that MSNBC didn’t air enough time for the Dean testimony.

“I hoped the John Dean hearing was an end to the circus. But no matter how many times we re-live the findings of the Mueller report, the conclusions will not magically change,” Collins said adding that “re-runs” of the Democratic circus are continuing.

“I fear once again, we are turning this committee into another circus. The Attorney General made the Mueller report public two months ago, we can all read it for ourselves. We’ve had some wonderful dramatic readings in here over the past week or two, and we all know what it says. As everyone in my generation growing up, they realize that the summer season was after all the shows had run the whole season, and [now] it’s time for re-runs. Tomorrow is the official start of summer, it’s time for re-run season! Without further ado, let the show begin,” he concluded. (Video Below)

Democrats must stop trying to re-do the Mueller investigation and promptly hold hearings on election security. We don’t need theater. We don’t need a rerun of John Dean. pic.twitter.com/Jd329OKKDZ

(Related: After Dean’s Testimony, Collins RIPS Nadler & Dems For Trying ‘To Satisfy A Rabid Base’)