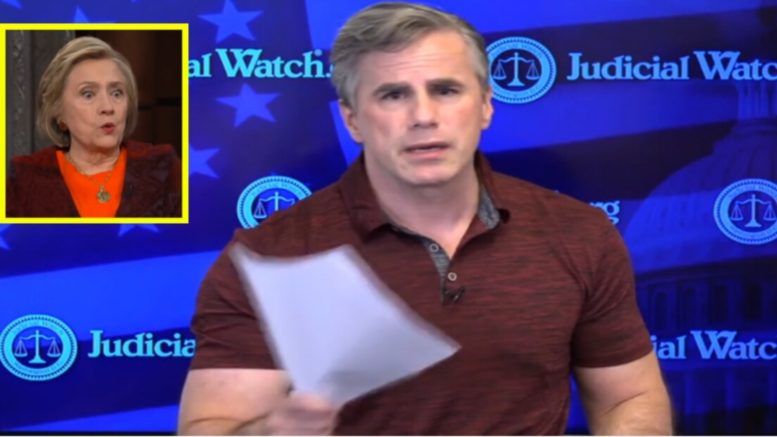 Judicial Watch is fighting for the American people and continues to do the heavy lifting exposing the absolute truth. While Democrats continue their dirty charades against a sitting President, and scheduling hearings with anyone associated to Trump in their search to “find crimes”, Judicial Watch is getting to bottom of the real corruption that the mainstream is covering up and burying.

According to a new bombshell press release from Judicial Watch, which was released Friday, Barack Obama’s Justice Department granted immunity to Heather Samuelson in June 2016, who destroyed 33,000 emails. She served as Hillary Clinton’s White House Liaison at the State Department and later Clinton’s personal lawyer.

On December 6, 2018, U.S. District Court Judge Royce Lamberth ordered Obama administration senior State Department officials, lawyers, and Clinton aides, as well as Heather Samuelson, to be deposed or answer written questions under oath. The court ruled that the Clinton email system was “one of the gravest modern offenses to government transparency.”

Judicial Watch’s discovery is centered upon whether Clinton intentionally attempted to evade the Freedom of Information Act by using a non-government email system and whether the State Department acted in bad faith in processing Judicial Watch’s FOIA request for communications from Clinton’s office, per Judicial Watch.

In March, Judicial Watched announced a schedule of depositions of senior Obama-era State Department officials, lawyers, and Clinton aides about the Benghazi and Clinton email scandals.

“We have a discovery that’s going to take place over the next few months. Discovery means evidence gathering. It means bringing people under oath and questioning them in person.” Tom Fitton, President of Judicial Watch explained. “We have ten depositions scheduled over the next several months.” (Continued Below)

During her deposition, Heather Samuelson admitted, “I was provided limited production immunity by the Department of Justice,” adding, “My recollection, it was June 2015 [later corrected to 2016].”

Samuelson also revealed that, contrary to what she told the FBI in 2016, she was, in fact, aware that Secretary Clinton used a private email account while secretary of state, according to JW.

Judicial Watch asked her, “Ms. Samuelson, when did you first become aware that Secretary Clinton used the e-mail address [email protected] while she was at the State Department?” (Continued Below)

Samuelson responded, “I believe I first became aware when either she e-mailed me on personal matters, such as wishing me happy birthday, or when I infrequently would receive e-mails forwarded to me from others at the department that had that e-mail address listed elsewhere in the document.”

The revelation comes days after the State Department identified dozens of “violations” regarding Clinton’s handling of classified material.

“To this point, the Department has assessed culpability to 15 individuals, some of whom were culpable in multiple security incidents,” Mary Elizabeth Taylor, the State Department’s Assistant Secretary in the Bureau of Legislative Affairs, wrote to Sen. Chuck Grassley. “DS has issued 23 violations and 7 infractions incidents. This number will likely change as the review progresses.”

President Trump responded on Twitter: “Wow! The State Department said it has identified 30 Security Incidents involving current or former employees and their handling of Crooked Hillary Clinton’s Emails. @FoxNews This is really big. Never admitted before. Highly Classified Material. Will the Dems investigate this?” (Continued Below)

Wow! The State Department said it has identified 30 Security Incidents involving current or former employees and their handling of Crooked Hillary Clinton’s Emails. @FoxNews This is really big. Never admitted before. Highly Classified Material. Will the Dems investigate this?

BREAKING: JW announced today that former SecState Hillary Clinton’s WH Liaison at the State Dept, and later Clinton’s personal lawyer, Heather Samuelson, admitted under oath that she was granted immunity by the DOJ in June 2016 (1/3).https://t.co/VKGxavgnhI