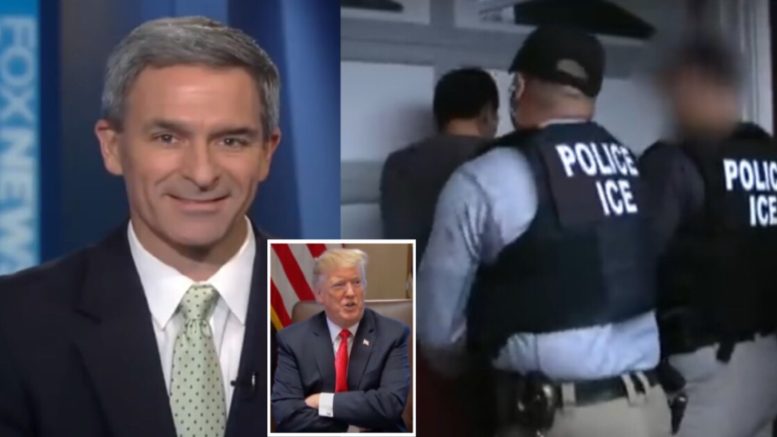 Acting Director of U.S. Citizenship and Immigration Services Ken Cuccinelli spoke with Dana Perino on “Fox News Sunday” where he weighed in on Congress, planned ICE raids, and deportation.

This comes as the President warned Congress deportations would start if they came up with “no solutions” and gave a two-week delay on the then- scheduled ICE raids.

Cuccinelli pushed back at Congress accusing them of complaining about a crisis at the border they have done nothing to solve.

He also explained how a surge of asylum claims are overwhelming the facilities that are strained for resources and the current volume of people trying to enter the U.S. has resulted in poor conditions and blaming lawmakers for not doing enough to fix the situation.

“People in the House come down and complain about them while not helping fix the problem. It’s the height of hypocrisy,” Cuccinelli said.

“They just want to politicize it,” he added. “They don’t actually want to solve the problem.” (Continued Below)

Cuccinelli also addressed deportation operations that President Trump has delayed and announced, “There [are] approximately a million people in this country who already have removal orders. They’ve already been through an extremely generous due-process pipeline, had removal orders, they don’t leave– they’re still awaiting removal by ICE.” [Emphasized]

“This is just what ICE is supposed to do. The fact that we’ve fallen to the point where we’re talking about it like it’s news tells you how far that we have fallen in the enforcement side,” he said. “It is the most violated federal court order in America.”

Cuccinelli also did an interview with CBS News’ on “Face The Nation” Sunday where he reiterated the same message and bluntly stated that despite a delay of mass deportations by President Trump two weeks ago, ICE agents are ready to detain and deport the roughly one million illegal aliens who have been ordered deported from the country. (Videos Below)

Cuccinelli said, “[ICE agents are] ready to just perform their mission which is to go and find and detain and then deport the approximately one million people who have final removal orders. They’ve been all the way through the due process and have final removal orders. Who among those will be targeted for this particular effort or not is really just information kept within ICE.” [Emhasized]

“I’m just pointing out that the pool of those with final removal orders is enormous. It’s important to note, here we are talking about ICE doing its job as if it’s special. And really this should be going on on a rolling basis for ICE and they’ve been interfered with, effectively, and held up by the politics of Washington to a certain extent,” he added.