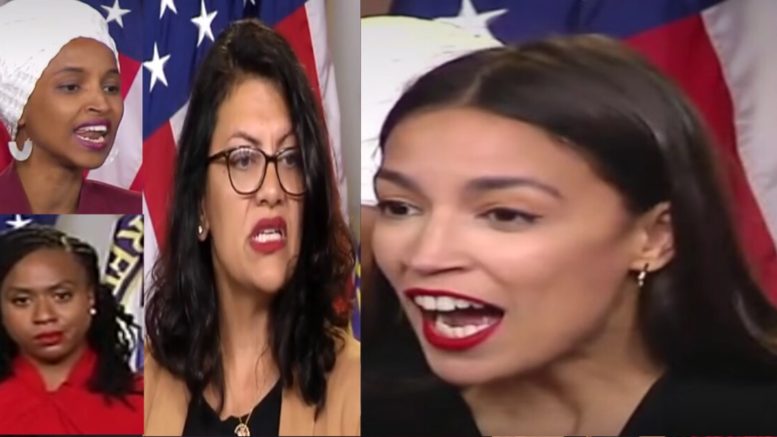 Rep. Alexandria Ocasio-Cortez took to Twitter after the “squad-ette” held their press conference Monday in response to the President tweeting over the weekend recommending progressive Democrat Congresswomen to “go back and help fix the totally broken and crime-infested places from which they came” before criticizing policies in the U.S.”.

During their press conference, Rep. Ayanna Pressley claimed, “We are more than four people. We ran on a mandate to advocate for those ignored, left out, and left behind. Our squad is big. Our squad includes any person committed to building a more equitable and just world.”

(Related: Kellyanne Conway Responds To The ‘Squad Drama’: ‘Keep The Cameras & The Microphones On, America Should See Who They Are!’)

Pressley’s comment comes after Speaker Nancy Pelosi “threw shade” at the “squad” as Speaker Nancy Pelosi (D-CA) told an audience in April, “They’re just four people. They only have four votes; a ‘glass of water’ with a ‘D’ next to it ‘would win in Ocasio-Cortez’s district.'”

Looking for support from her fans or attention, Alexandria Ocasio-Cortez posted a video on Twitter of Pressley’s claim that their squad is “more than four people” and asked, “Who’s in the Squad? Check-in!” Cortez was met with immediate backlash. (Continued Below)

Wait you’re actually calling yourselves the squad? I thought that was a joke.

The squad , four pathological liars and race baiters trying to be relevant while becoming a punchline to most Americans.

AOC IS ESSENTIALLY THE QUEEN OF THE UNIFORMED, PRINCESS OF INUENDO & REGURGITATED FALLACIES: HOW MANY TIMES DO WITNESSES NEED TO EVICERATE HER INTELLECTUALLY IN HEARINGS, MAKING HER LOOK LIKE A PRE SCHOOLER ATTENDING A CLASS IN CALCULUS, FOR DEM/SOC PRTY TO SEE WHAT IT’S BECOME?

Calling yourselves the “squad” couldn’t be more infantile. Good luck in 2020. With your 9% favorable rating among those who know who you are, you’ll need it. As for me, a registered independent voter, you and your “squad” have convinced me to vote Trump & Republican in 2020.

The squad with no accomplishments…why do the American people pay these salarys ?.. Not 1 piece of legislation passed..they don’t even show in the districts that voted them in..

You mean… who’s in the Commie squad? Check in! ⬇️👿🤡👹 pic.twitter.com/VQTKaPyVfM

These congresswomen should do their jobs instead of complaining on Twitter all the time. Get back to WORK and earn your pay!!!

Anyone who has the brain capacity of an adolescent girl. What grown ups call themselves a squad? Good Lord.

We leave you with a new RNC campaign ad that highlights the extreme rhetoric coming from the “squad.”