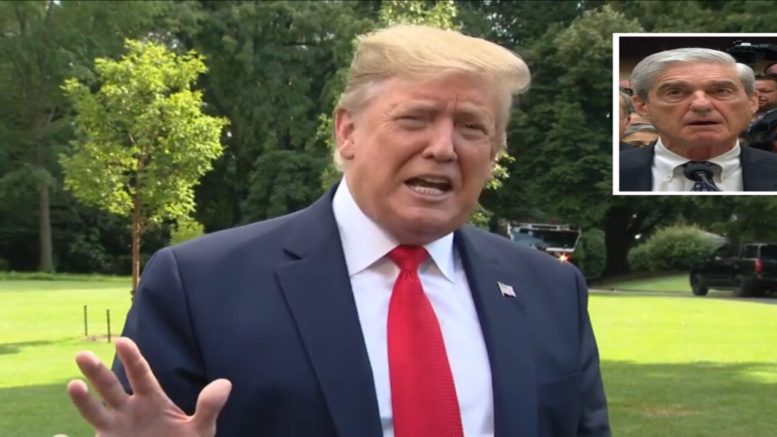 President Trump ripped former Special Counsel Robert Mueller’s on Wednesday afternoon, saying he “did a horrible job both today and with respect to the investigation,” but “in all fairness to him he had nothing to work with.”

This comes after Mueller testified before the House Judiciary and Intelligence Committees earlier in the day.

“It’s a disgrace what happened today and some of my biggest opponents wrote things today that I wouldn’t have believed they would’ve written and I appreciate that they did that. This has been a very bad thing for our country,” President Trump said while speaking to the press. “Despite everything that we’ve been through, it’s been an incredible two and a half years for our country.”

He said the investigation was nothing but a “phony cloud” calling out Reps. Adam Schiff (D-CA), Jerry Nadler (D-NY), Chuck Schumer (D-NY), and Nancy Pelosi (D-CA), saying that “every one of them knew it was all phony stuff,” adding that “They should be ashamed of themselves.”

President Trump also said that Robert Mueller didn’t have the right to exonerate. Rep. Michale Turner (R-OH) schooled Mueller during the hearing on “exoneration” and called the former special counsel out because he does not have the power. (Continued Below)

The President also pointed to multiple news agencies in the press pool calling them “fake news” and even pushed back at CNN’s Kaitlan Collins after she asked if he is concerned about being indicted after office.

“Robert Mueller made a correction [about WikiLeaks] and you still asked the question. You know why? Because you’re fake news! And you’re one of the most. And let me just tell you, the fact that you even asked that question, you’re fake news! Because you know what? He totally corrected himself in the afternoon, and you know that just as well as anybody else,” he declared.

Trump also said that Mueller’s performance wasn’t very good. “He had a lot of problems, but what he showed more than anything else is that this whole thing has been 3 years of embarrassment and waste of time for our country. The Democrats thought that they could win an election like this, I think they hurt themselves very badly for 2020,” the President expressed. (Continued Below)

President Trump said that the Democrats are devastated. “[They] lost so big today, their party is in shambles right now. They’ve got ‘the Squad’ leading their party. They are a mess,” he said adding that this was a “devastating day for the Democrats.”

Trump also called to “investigate the investigators,” reiterating his sentiments that Mueller’s Russia investigation that spanned over two years was a “ridiculous hoax” and a “witch hunt that’s been going on for a long time.”

Asked about Mueller’s performance, the President said, “Look. I think Mueller did a horrible job, both today, and respect to the investigation. But in all fairness, to Robert Mueller, he had nothing to work with. Robert Mueller had no material, he had nothing to work with. So obviously he did very poorly today. I don’t think there’s anybody among the ‘fakers’ that would say he did well. I look at your people and they were saying it was devastating for the Democrats.”

President Trump tweeted after the hearing in all caps, “TRUTH IS A FORCE OF NATURE!” (Video Below)

TRUTH IS A FORCE OF NATURE!

(Related: During The Hearing, Rep. Ratcliffe RIPS Mueller For Failing To Follow DOJ Policy: ‘It Was Not [Your] Job To Determine Trump’s Innocence’)